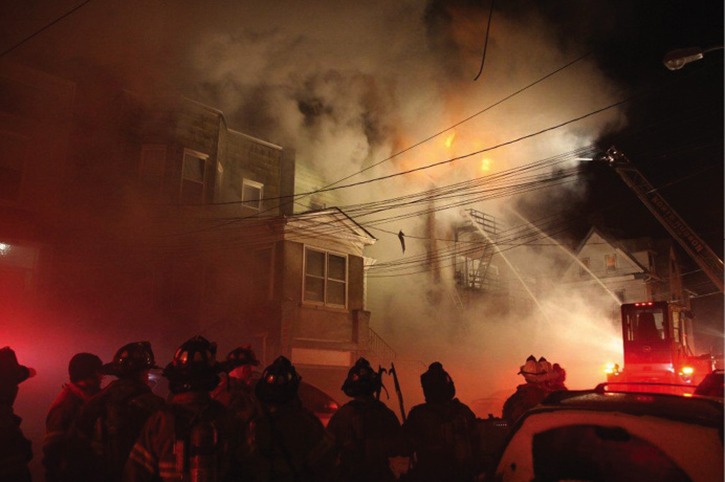 Uncommitted assignment: That sounds like an oxymoron. The fire service has a knack for unique phrases, so I figured, why not one more? I have played around with this concept in my head for more than two years; discussed it with other officers; and thought that I had heard it somewhere before, but no one I talked to had heard of anyone who mentioned or addressed it. It is similar to the tactical reserve concept but takes it a step further, enhancing the firefighter safety profile of the operation and fostering a proactive mindset while maintaining resource pools.

You are the incident commander (IC) at an active structural fire incident that involves a three-story, wood-frame multiple dwelling built in the early 1900s with heavy smoke showing on all floors. Companies are in an offensive operation mode, searches are in progress, two lines have been stretched (only one is operating), coordinated roof ventilation and other support activities are commencing, and the building is being laddered.

Throw Back to Basics: Riding Assignments

Drill of the Week: RIT Assignments

Fire-Based EMS: The Role of Ambulance Crews on the Fireground

A Mayday has been declared, as a firefighter has fallen through a weakened floor. Your rapid intervention team (RIT) is deployed into the structure. After a few minutes, the team reports that it found the down firefighter on the second floor rear and is beginning removal operations. The team needs help and requests additional equipment for the rescue: a chain saw, additional rope, and a flexible stretcher.

How do you comply with this request in a coordinated and sane manner? Will there be a considerable delay? Can you use companies already deployed to other assignments? How will that affect safety and the action plan? How do you carry out this request for help without compromising the firefight and possibly jeopardizing other firefighters and potential victims? You called for a second RIT, but it is not yet on the scene. What do you do?

The RIT’s Function and Responsibilities

The RIT assignment is standard across the fire service. This assignment is a stand-alone “get ready and wait” activity given to dedicated companies that should not be used for any other purpose other than firefighter rescue. The RIT’s job is to announce its arrival on scene, accumulate the proper RIT equipment, report to the command post, liaison with command and the accountability officer, size up and soften up the structure, monitor the radio, stand by, and hope that nothing that will require its intervention happens. Even if not activated, the RIT needs to be beyond ready to be activated (photo 1). 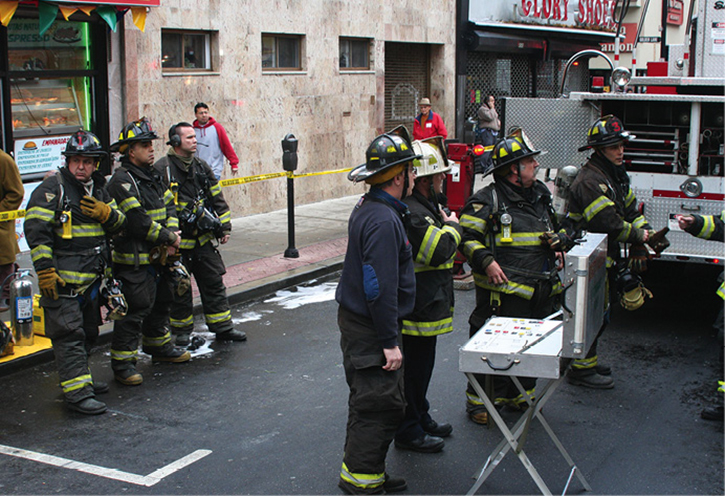 (1) The RIT. All tools are assembled, the building has been softened, and the team is standing by. The officer is wearing headphones and concentrates only on listening for trouble. If the team is deployed, is there a plan for resources to assist it if needed? (Photos by Ron Jeffers.)

When the call for assistance is received, the assigned RIT acts as a recon team and a firefighter rescue team that is focused on carrying out both activities in rapid succession. As a recon team, the RIT enters the building with only the most vital equipment to locate the down firefighter. There is no need to lug all the RIT equipment into the structure because it will slow down the team.

After the firefighter is found and assessed, if the situation requires, the team can relay to the rescue group supervisor its need for additional equipment and support; and a second team—the RIT assist team (RAT)—can bring them in more quickly.

Why should there be a RAT? First, it is needed because most departments do not have the luxury of having two RITs on the scene. When the on-scene RIT is deployed, command is responsible for requesting an additional RIT. Second, it is needed because the second RIT is not requested until the first RIT has been deployed and the reflex time from dispatch, through response, and the second RIT’s arrival is considerable. During that interval, if the initial RIT requests assistance, then Command can use a RAT.

The RAT is a company assigned to be ready and capable to immediately assist a RIT that has been deployed. The RAT is deployed from the tactical reserve in Level 1 Staging at the command post. If staffing levels require it, Command must not hesitate to request additional alarms to ensure a RAT is available as early as possible; Command should always strive to maintain a tactical reserve of at least three companies.

The RAT policy mandates that Command assign one company as a RAT, basically a stand-by tactical reserve position for the RIT. This does not mean this company is not available to go into the firefight. It is a resource committed to the firefight and must be put into the game as needed; however, while in staging (and only while in staging), one of the companies will have an ancillary duty as the RAT.

It carries out the function of the RAT only if a Mayday is declared and the RIT goes into action (there will be no second RIT at that moment in time). The RAT duty is to provide support as requested by the initial RIT. If the initial RIT begins the removal, the RAT can be in place to help clear the way and ensure the removal is smoothly carried out. If the RIT needs additional equipment and support activities to make the rescue, the RAT provides the resources and support (photo 2).

(2) One of the companies standing by as a tactical reserve should be designated the RAT. If the RIT is deployed, this RAT will have specific duties to assist with the rescue, decreasing the potential for chaos that a Mayday activation often triggers.

All companies in tactical reserve must be trained and prepared to be a RAT. When a company is assigned the RAT duty, it moves from tactical reserve in staging to the RIT staging area where the RIT tool pool is located. These areas are usually in close proximity to each other. The RAT should consult with the RIT regarding the tactical position of companies inside the building and on the roof as well as assess the tools on hand at the pool. If the RIT is deployed, the RAT can replenish the pool as the situation requires.

If a Mayday is declared, working under the supervision of the Rescue Group supervisor (or Command if a Rescue Group supervisor is not yet assigned), the RAT begins to closely monitor the rescue operation and prepares to assist as requested. If requested, the RAT then carries out the duties necessary to meet the objectives of the rescue as directed by the RIT. The RAT must be familiar with the tools and policies of the RIT. This allows for the forecasting of the “next move and the next move.”

RAT duties and responsibilities cover all incipient activities required to support the RIT operation. The RAT must be adept at assisting in packaging, using mechanical advantage systems to assist in the movement of the victim; and self-contained breathing apparatus maneuvers, such as bottle changeover, converting the harness, and drag-and-carry capability. Additional duties include setting up a Denver maneuver, a Nance maneuver, a ladder fulcrum, or any number of exterior firefighter rescue activities.

When Command designates a company as the RAT, that company should acknowledge its RAT status over the radio, inform the accountability officer, and brief with the RIT in place. If the company is needed to fight the fire, it can be assigned to that duty as long as a Mayday is not in progress. If a Mayday is declared, the RAT becomes a committed resource to the RIT operation. Command can also transfer the RAT assignment as additional companies arrive at staging. As companies rotate in and out of rehab, the RAT designation can also be rotated. It is a flexible system (photo 3). 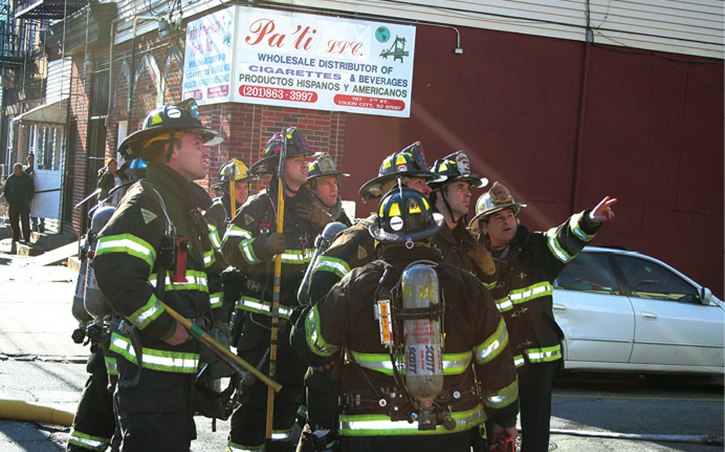 (3) Command assigns a company in tactical reserve to a fireground task. If this team was originally assigned the RAT duty, another team would be assigned by policy to replace it immediately. Here, the team standing by in the rear can now be assigned as the RAT. It would acknowledge the RAT assignment over the radio.

Assigning a RAT will be tough, if not impossible, in the initial stages of an operation where resources are scarce and a tactical reserve is not yet in place. But, if command has the RAT mindset based on departmental policy, there is a greater chance of creating a tactical reserve.

A RAT provides a control mechanism if the unthinkable happens. When a RAT policy is in place, enforced, and unilaterally supported and complied with, both Command and the firefighter rescue teams can take controlled and coordinated actions with confidence and competence. Having a RAT in place can help reduce confusion in the initial moments of the RIT activation. A RAT policy can minimize the need for “shoot from the hip” actions in a stressful time. A solid policy addressing this assignment will reduce stress and create structure when the organization goes into firefighter rescue mode, the time when organization and structure often are the last things on the minds of those involved.