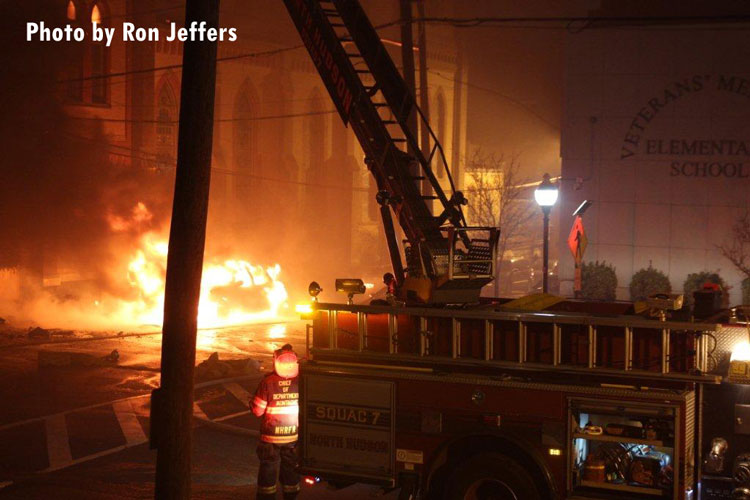 A fast-moving fire on the morning of March 4th, during a period of 30-mph winds, consumed the upper floors of a mixed-occupancy building in Union City, New Jersey. The fire took the life of a two-year-old child. Burning embers flying through the neighborhood started a fire in a nearby church steeple one block away. In addition to strong winds, the temperature was 21 degrees with a real-feel temperature of 7.

North Hudson (NJ) Regional Fire Department companies were dispatched to 1404 Summit Avenue at 0102 hours and Fire Control notified units via radio that they were receiving numerous phone calls and reports of people trapped. When 1st Battalion Chief Mark Lorenz arrived, he said he couldn’t get a proper size-up due to the heavy smoke in the street. There were people running out of the three-story, wood-frame building into the cold; they hadn’t had time to grab any possessions, including coats. One resident told the media that he had escaped through a window with his family. The chief reported a heavy volume of fire in the building and ordered ground ladders to be set up by arriving units. He then struck a second alarm, quickly followed by a third alarm. In addition, he called for BLS and ALS units to the fire.

Firefighters went to work as flames were threatening adjacent exposures in this densely populated and congested city. The father of a two-year-old escaped the flames but went back to try and save his son and was seriously burned. Unfortunately, the child could not be reached by firefighters due to the heavy volume of fire.

“The firemen tried,” said one resident to the media. The father was trans[ported to St. Barnabas Burn Center in Livingston, New Jersey. As flames vented out of the front windows and through the roof, the rear of the structure was a wall of fire.

Flames extended to 1406 and 1408 as numerous handlines and master streams were set up and operating. A ladder pipe was set up in front of the buildings by Ladder Co. 1. Because of numerous overhead power lines, Tower Ladder 3 could not set up on the 14th Street side.

The high winds blew burning embers down about the neighborhood east of the fire. Police officers began banging on doors of wood-frame dwellings on Central Avenue, one block east of the fire, and told residents to evacuate due to the fear of embers igniting another fire. Residents within a two-block area were told to leave their homes. A Union City police bus was quickly dispatched to the scene to help transport residents to a nearby school for shelter.

About 30  minutes into the fire, Squad 7, on ember patrol, reported that the steeple of St. Joseph and Michael Church, at the corner of Central Avenue & 14th Street, was burning. The church is located one block east of the fire scene.

A fourth alarm was transmitted by Deputy Chief Charles Thomas and units reported to the church. The steeple was now heavily involved in flames as Squad 7 set up their squirt device to attack the fire.  Burning embers were still raining down on the neighborhood as police continued banging on doors to wake up neighbors to leave the area.

The flames in the church dropped down to the upper floor of the century-plus old structure, and Squad 7 was ordered to move their rig further north, away from the collapse zone that was now established. As burning debris fell from the steeple, two parked cars were set on fire, followed by explosion noises coming from tires. Eventually, spectators watched in awe from a block away behind fire lines when the burning steeple crashed down into the intersection, taking power lines with it and causing bright white-colored explosions.

Six alarms were transmitted with mutual aid companies reporting to the scene from Jersey City, Hoboken, Kearny and Bayonne. In addition, Secaucus Tower 2 reported to the front of the church on Central Avenue. This unit, and North Hudson Ladder 5, maneuvered on this two-way street that is hampered by a center island to move their aerial devices around power lines that had not fallen and set up master streams. Also, Tower Ladder 3 moved up to the church and was able to set up on the 14th Street side.

Additional mutual aid was need to cover the area during this time, and for the possibility of embers setting more fires. Hoboken Engine 5 and Ladder 1 set up a ladder pipe on 14th Street, east of Central Avenue, to protect the wood-frame dwellings and other occupancies if fire erupted on the roofs of those buildings. Fortunately, it was never needed.

Calling in mutual aid companies had its road blocks. Essex County was unable to provide a task force because of fires in Orange and Irvington at the time. A task force from Union County was summoned. In addition, due to the possibility of other fires erupting, a task force from the Fire Department of New York (FDNY) was called in. At 0245 hours, Manhattan dispatched Engine Co.’s 1 and 14, Tower Ladder 12 and the 8th Battalion Chief to Union City. This was the second time since 2001 that FDNY sent companies to Union City. On that evening, due to a rash of fires in Hudson County, including three major fires in Union City, FDNY sent companies across the Hudson River and went to work in Jersey. The night of December 1, 2001, is known as the “Night of Fire” by North Hudson firefighters. This time, FDNY units staged on 12th Street, but fortunately there were no additional fires and the New York City units did not go to work.

The fire scene went to six alarms and firefighters were hampered by ice covered streets and equipment, including ice-coated turnout gear. Local D.P.W. crews came out and covered the streets with rock salt, but it seemed like some ice would continue to form in a thin, undetected style. Several firefighters were taken to the hospital and treated for minor injuries.

As the sun rose, master streams were still pounding stubborn flames on Summit Avenue as well as on the church that continued to smolder. Thick ice coated the power lines and the remains of the steeple on Central Avenue. Besides a shelter set up for victims at a nearby school, Veteran’s Memorial School, opposite the church, was opened for firefighters to warm up. Even though there was no electricity, the shelter from the cold and winds helped members warm up a bit before returning to the street. The Gong Club canteen was set up on Summit Avenue for additional rehab services.

Officials estimated about 15 families consisting of 80 people were displaced on Summit Avenue. This was the second major fire in the neighborhood in three months. On December 21st, a five-alarm fire consumed a furniture store on 13th Street and Kennedy Boulevard, on the North Bergen side of the boulevard. This fire was answered by the same North Hudson Regional FD tour-Group 1. In addition, two pieces of apparatus suffered radiant heat damage at that fire.

Families homeless with no possessions, a seriously burned father who lost a son, and a church devastated by fire has the lower Union City community in shock.  St. Joseph and Michael Church has been a fixture since the 1860’s, and many first responders who have grown up in the area attended over the years. Police Chief Richard Molinari, a church parishioner, could only watch and supervise his members as the church burned. Church services, during this holy time, are expected to be held in a local school.

Tongs Made to Remove Charged Wire