For many years, nationally known incident command system (ICS) instructor Don Abbott and his wife Bev have traveled around the United States teaching ICS using a diorama (a model representing a scene with 3-D figures) Don called “Abbottville.” I watched Don and his team set it up one evening in a hotel ballroom, which took hours and filled a large portion of the space. The display depicted multiple community hazards such as bulk liquid fuel storage; marine terminals; bulk propane storage; and standard municipal occupancies such as schools, hospitals, churches, and hotels. The diorama also spouted smoke and fire on command.

In 2015, I became the curator and principal instructor for a smaller-sized diorama of a typical New England town called “The Village.” I have used this HO scale community to teach all aspects of risk assessment, risk reduction, and incident command/management. It measures 5 × 8 feet and was designed and built after a community risk assessment, which is one of the most important aspects of building and using this training tool. Once you identify the appropriate risks, there are almost unlimited resources available in the HO scale world to use when creating your own custom “Village.” To simulate response units and general use vehicles for your diorama, you can use products from Mattel’s Matchbox™ line and other metal cast manufacturers. Online Web sites can also provide resources for figurines such as color-coded victims to triage tag systems. 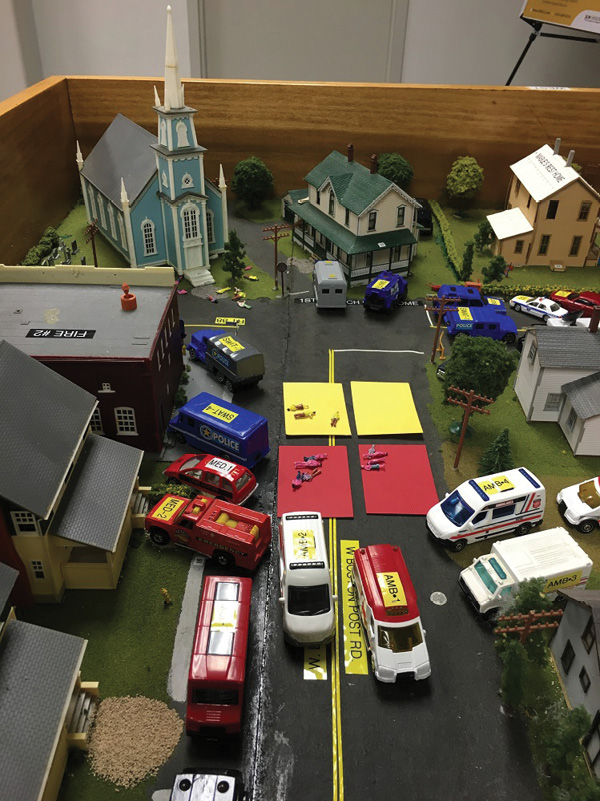 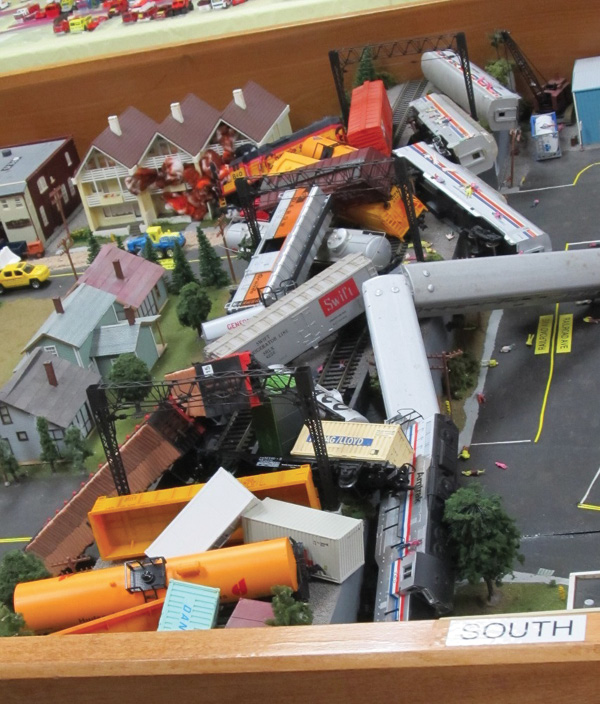 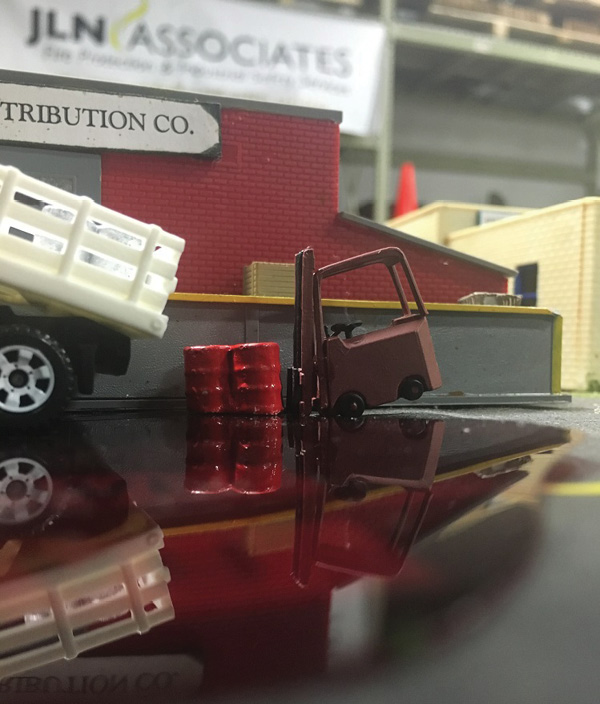 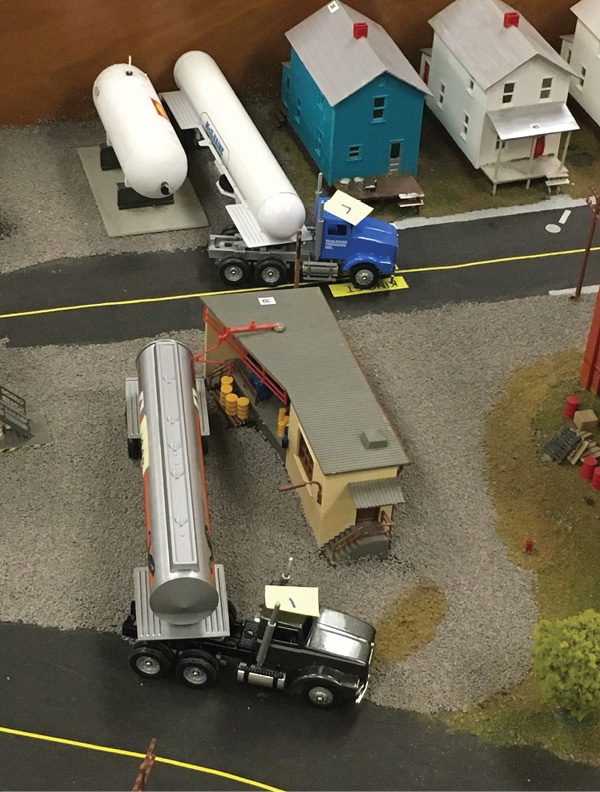 (1) “The Village” details the aftermath of an active shooter incident. (Photos by author.) (2) A closeup of a passenger vehicle/freight train derailment accident. (3) A forklift accident. (4) A hazmat truck spill.

A word of caution, however: Building and protecting a full-size diorama can be costly. In addition to constructing the base structure and streets, costs for most miniature buildings, railways, highways, and hazmat components can range from $15 to $100 or more each, depending on the type and size. In its present configuration, the Village is part of a fictitious county that has 15 fire stations and eight emergency medical services (EMS) stations with hundreds of fire, rescue, hazmat, and EMS response units. Additionally, police, special weapons and tactics team, urban search and rescue, foam, aviation, and marine units are shown to be on standby if needed for the evolution.

Supporting the community itself are more than 100 pieces of rolling stock such as private vehicles, public works, construction vehicles, delivery vehicles, school buses, and so on. Although this number of resources is needed to start, the more there are, the more can be done—i.e., setting up protection for a presidential motorcade. A simple request on social media to friends for used HO trains, buildings, and response vehicles may also prove quite fruitful in the beginning. Next, I searched sales and auction sites online.

The Village diorama provides several key learning opportunities for the instructor and students. First and foremost, the training is paced by the participants’ skills. The instructor can react to the students’ abilities and reinforce or expand them as needed. Second, students can experience all aspects of emergency services in a no-fault/no-risk environment; time-outs or “do-overs” are always appropriate as needed. Third, the diorama gives the students a sense of proportion and exposure distances not easily experienced in multimedia simulations. Last, you can experience and challenge virtually any public safety concept. 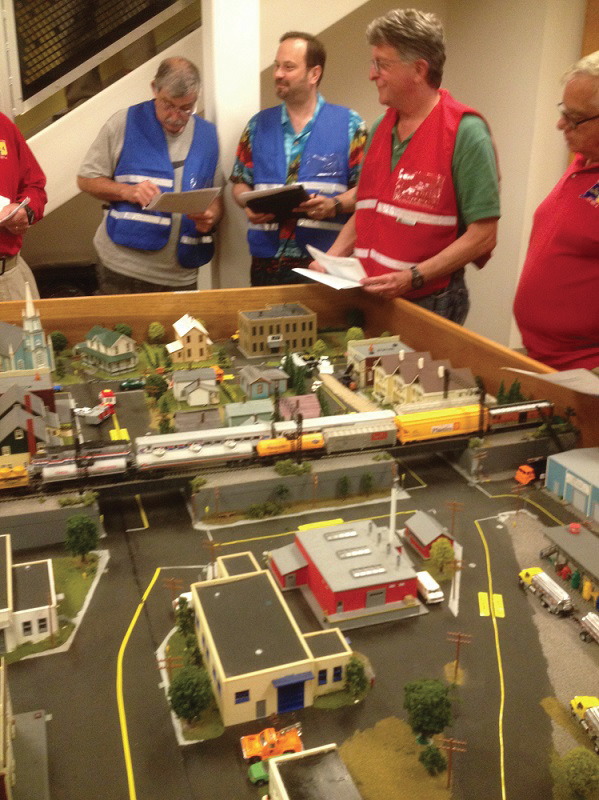 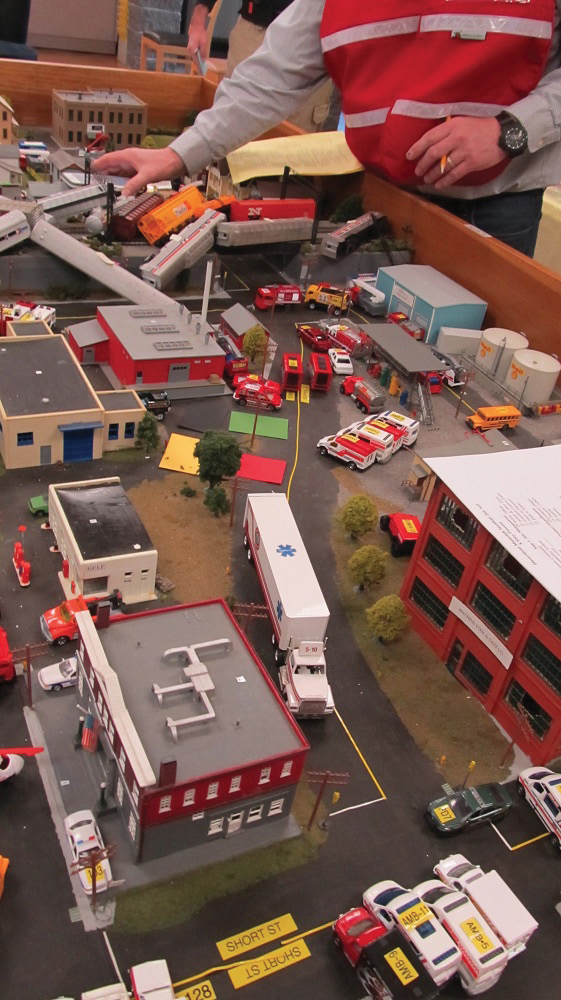 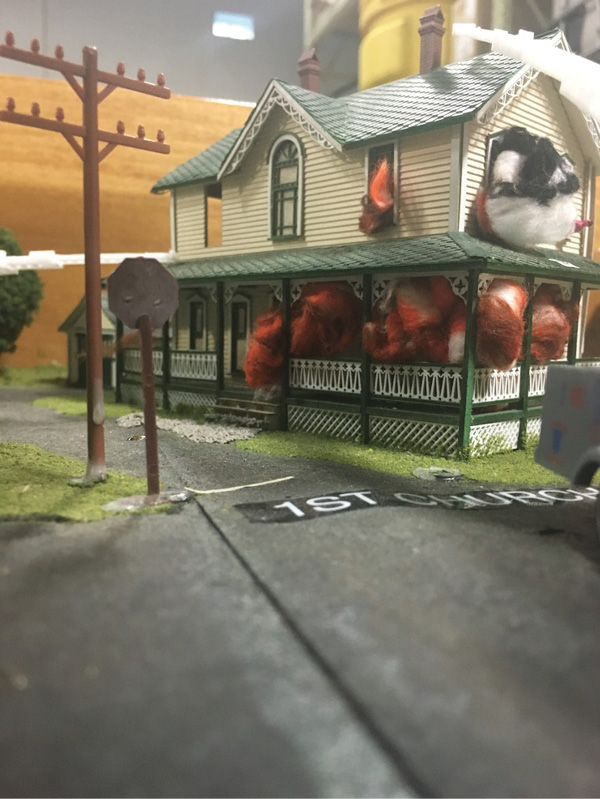 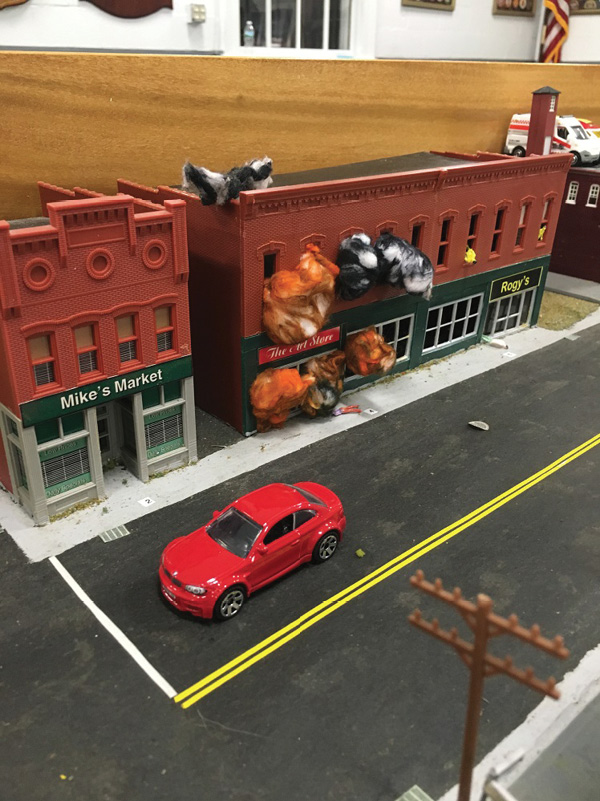 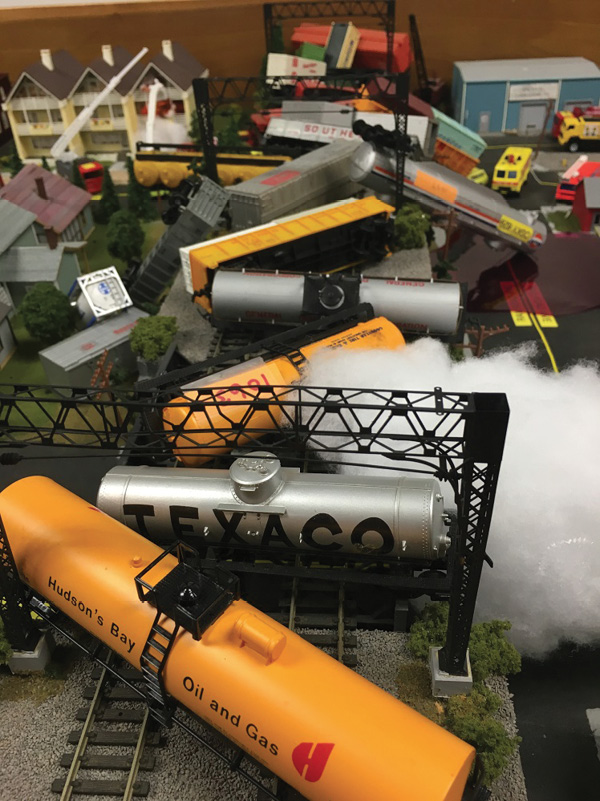 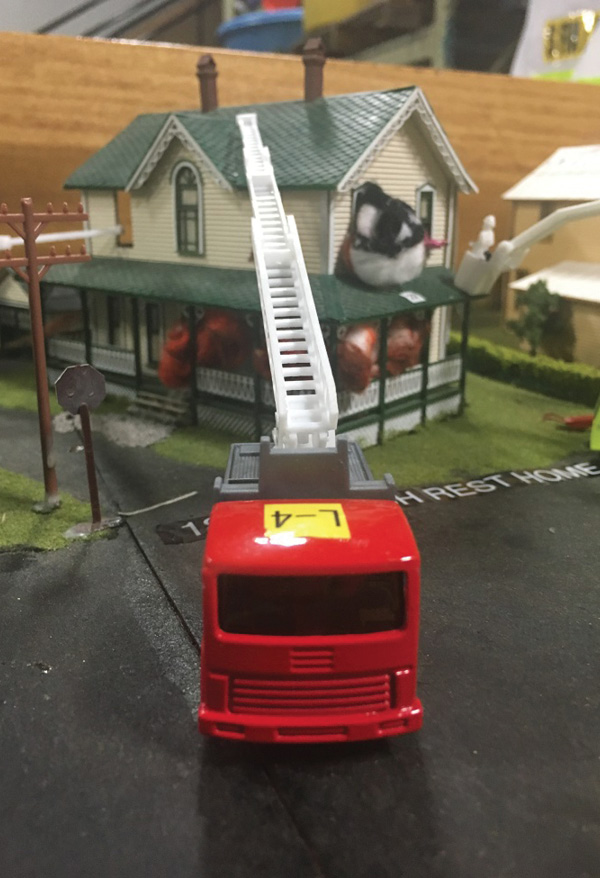 Part of the experience for the students is the visual aspect of the size-up and the changes that take place based on their tactical choices. Objects such as gray, brown, black, and orange/red cotton balls can show a student the skills of reading smoke and fire spread. The instructor can also change the smoke and fire size based on the correct or incorrect application of water. You can also drill or review specific standard operating procedures during the class.

Shaping colored gels (used by the theatrical lighting industry) can portray pools and streams of various fluids. Pillow batting can depict vapor clouds and their movements, while the batting can show vapor densities in multilevel dioramas. Broken buildings and damaged vehicles help recreate the look of a natural disaster. 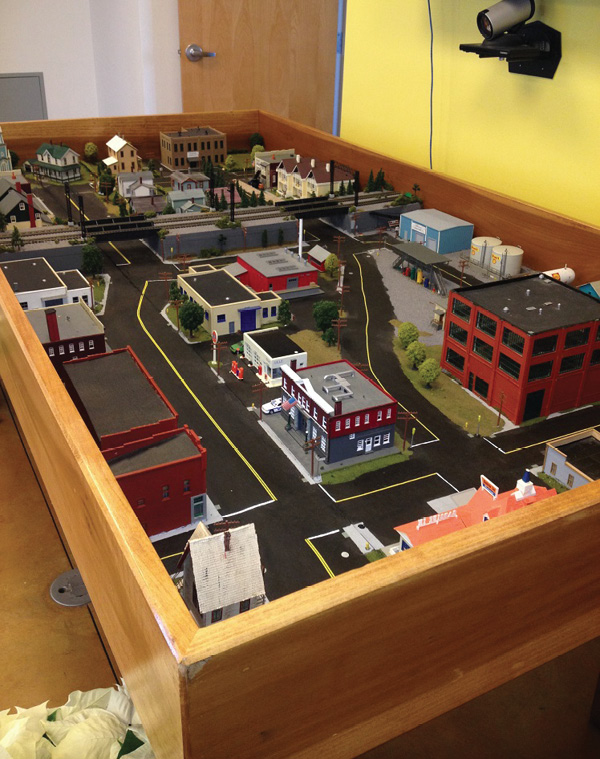 (11) Readying the Village for a risk assessment exercise.

You can use the Village to challenge the newest officers, incident management teams, and seasoned incident commanders. Ultimately, you will be able to train, stress, and evaluate all ranks and levels of responsibility. The only limitation is your imagination.

NICHOLAS DeLIA is a 40-plus-year fire service veteran and the chief (ret.) of and fire marshal for the Groton (CT) Fire Department. He is certified as a Connecticut State fire officer IV, fire instructor II, safety officer, and hazardous materials technician. DeLia has also served in leadership roles in state and regional hazardous materials response and urban search and rescue and incident management teams. He is a senior fire service consultant for JLN Associates and a contract instructor for Community Risk Reduction programs at the National Fire Academy. DeLia has a BS in fire service administration from Empire State College.