In the fire service, we tend to focus on our mistakes and the things that went wrong. These can be important learning lessons, but we seldom point out the things that we did well. This is unfortunate because revealing the positive things we did reinforces them in our day-to-day operations.

The city of Warwick, Rhode Island, has a population of approximately 83,000 (2010 census) and an area of 50 square miles. It features an airport, a rail line, and an interstate highway. The Warwick (RI) Fire Department (WFD) has nine fire stations. It operates nine engines (an officer, two firefighters), three ladders (an officer, one firefighter), one special hazards (heavy rescue) vehicle (an officer, two firefighters), two battalion chiefs, and four ambulances [advanced life support (ALS) with one officer and one firefighter]. Total on-duty staffing is 46 firefighters. The fire department responded to 16,109 total calls in 2015.

At 0220 hours on September 9, 2015, the WFD received a box alarm for the Four Seasons Apartments. The initial dispatch consisted of three engine companies, two ladder companies, one rescue company, an ALS ambulance, and a battalion chief. This was followed by multiple calls reporting a large fire.

This call prompted the immediate dispatch of an engine company for a rapid intervention team, an additional engine and ladder for staging, and another battalion chief for safety. The first-arriving company found heavy fire on all three floors from a stack of apartments on side C (photos 1, 2). The fire went to the equivalent of five alarms and resulted in water and fire damage in 18 of the 48 apartments. There were no civilian injuries, and one firefighter had minor injuries from a ceiling collapse.

These “garden apartment”-style buildings were built in 1970. They shared a fire alarm system tied directly to the WFD. The alarm system consisted of local “residential”-type detectors in the individual apartments that were not tied into the building system. There were smoke detectors in the hallways and staircases as well as pull stations near the exits. They were all part of the municipal system that transmits the alarm directly to the dispatch center through a radio box. Detection was delayed because the fire started on the exterior of the building and did not activate the system until after 911 calls were received. Also, the buildings did not have sprinklers. The buildings are Class V construction with parallel chord trusses in the attic and between the floors and ceilings.

Two years prior to this incident, the WFD performed multicompany drills on a similar building in a complex undergoing demolition for airport expansion. Therefore, WFD firefighters were familiar with the layout and challenges of these garden apartments.

When the first companies arrived on scene, they had limited resources. The first-due engine positioned by the C/D corner of the fire building; this allowed members to deploy their preconnected handlines quickly. Later in the incident, they transitioned to interior attack through stairwells and with ground ladders. By knocking down the large volume of exterior fire, they delayed the spread of the fire to allow companies to search the fire building.

At 0220 hours, there was an extreme life hazard and potential for large loss of life. Fortunately, neighbors alerted other tenants of the situation, and everyone self-evacuated prior to fire department arrival. However, the apartments still needed to be searched. There were three floors, each with four apartments. The initial primary search consisted of one company per floor; this meant that each company had to search multiple apartments simultaneously. Visibility was limited, but searchers were able to check means of egress, entrances, and bedrooms. Because most of the doors were left unlocked, most tenants were able to flee quickly, and forcible entry for crews was not a problem.

While companies initially searched the fire building, horizontal ventilation was withheld. The fire had extended into some of the apartments and attic space, but it had not yet vented through the roof. The search crews did not have handlines with them. If the windows in the stairwell and apartments on side A had been broken, this would have created a new flow path, putting the searching companies between the fire and the exit. Visibility for the searching companies was poor, but there was minimal heat, and they were able to verify that all residents had self-evacuated.

A Call for More Resources

The incident commander (IC) arrived seconds after the first-arriving company and transmitted a second alarm immediately. It is a WFD standard operating guideline (SOG) to keep one engine and a ladder in staging; the dispatch center does this automatically without being told. As companies are called on scene from staging, they are replaced, and companies are relocated to stations closer to the fire. Eventually, every engine and ladder company in the city was working at the scene. Also, multiple mutual-aid companies were put to work. Mutual aid also back-filled some stations to provide coverage throughout the city.

It is vitally important to have companies with their apparatus in staging. The IC knows exactly where additional resources are located. For this incident, the staging area was in a large parking lot at the complex entrance, which allowed companies to walk in if only staffing was needed or to respond with apparatus if needed.

The complex had hydrants on its grounds. The water supply was sufficient for the first engine’s initial – and later – interior attack. As a tower ladder, a ladder pipe, and 2½-inch handlines were put into operation, additional water was needed. Companies avoided the temptation to tap into other hydrants at the complex; this probably would have resulted in no one having sufficient water.

One supply line was laid in from the main road at the entrance. Another hydrant was located in an adjacent neighborhood, and some fence was removed to access it. Both of these lines were put into operation quickly because engine companies were available in staging. 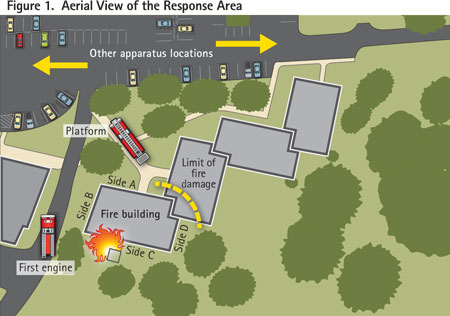 Deciding Where to Make a Stop

Once the fire got into the attic, it propagated rapidly. A fire wall separated an attached, identical 12-unit building. The fire wall was constructed of concrete block and did extend through the roof. There were openings in the wall for plumbing and electrical conduit the allowed the fire to extend through the wall. The IC sent companies to check the conditions on the other side of the fire wall; they found that fire had already gotten past it. The IC decided to drop back companies to a hallway; with multiple hooks and lines, they pulled down as much ceiling as possible and made a stand there. With the help of the tower ladder operating on the far side of fire wall, companies were able to cut off further extension, and they eventually extinguished the fire.

For defensive operations, an aerial platform is essential. If your department does not have one, call mutual aid for one. More importantly, leave room for one. For this incident, Ladder 1 was able to set up in front of side A and cover the entire side of the fire building. It could also cover the entire front of the attached building. Being able to put a stream flowing 1,000 gallons per minute in each window and sweep the attic from below probably prevented the loss of multiple buildings.

As the incident progressed, the IC expanded the IMS. A chief officer was assigned to operations on side C; three to four companies operated there throughout the incident, transitioning from defensive to offensive and back again multiple times. Another chief officer was assigned to interior operations on the exposed/attached building. Again, multiple companies transitioned from offensive to defensive and back. Other chiefs were assigned to safety, public information officer/liaison, communications, and rehab.

Assigning a Company to Help the IC

It can be helpful to have a company standing by as a “fresh” crew when needed. However, this crew can be helpful for other fireground tasks, such as the following:

Follow your SOGs! For this incident, the initial companies followed department SOGs with little direction from the IC.

By having a plan ahead of time, companies knew their jobs and did them with a minimum of radio traffic.

The positive outcome of the incident came down to competency at two levels. First was at the strategic level: The IC had a plan. He communicated it to the command staff and company officers. To carry out his plan, he gave specific and attainable tactical objectives. Second was at the tactical level: Companies carried out assigned tasks and notified the IC of their completion or incompletion. They were then given another task or removed from the building. Company officers and crews had the self-discipline to avoid “freelancing”; this made accountability more manageable, and the IC was able to coordinate actions to match his plan.

THOMAS BRADLEY is a 26-year fire service veteran and a lieutenant with the Warwick (RI) Fire Department, where he has served for 18 of those years. He is also an instructor for the Rhode Island State Fire Academy.