THE grounds round the reservoir have been laid out as a public park and fitted up with buildings, benches, and tables—a boon which is thoroughly appreciated by the citizens, who in summer come in crowds to enjoy its advantages. Views in, and of Reservoir park are given herewith, as well as of the reservoir itself, and its surroundin s.

During the past year the total pumpage was 3,194,049,850 gallons—an average of 6.011,095 per day—a daily per capita of 111 gallons, based on a population of 54,000. It is estimated that seventy gallons per capita a day are used for domestic purposes, and forty-one for elevators, motors, fountains, flushing sewers, blowing mud and culm out of the street mains, sprinkling streets, manufacturing, and other purposes. The average time of pumping per day was thirteen hours and thirteen minutes. The capacity of the four pumps, (two K nowles and two local) is 2,500,000 gallons each. The pumping engines having to work so long every day, so as

to keep a full supply in the reservoir, and thus take advantage of depth for sedimentation, require (says the report of the board of water commissioners) the greatest care, skill, and attention to perform their duties. For twenty-three years these engines have pumped all the water the city has required for all purposes. During .that time Jhey not failed to perform the duties required of them. The record is a remarkable one and seldom equaled in pumping wat r. A city of 54.000 inhabitants, however good the work done by the pumping engines in providing its water supply, should have them in duplicate to prevent the supply being interrupted by accident.

It is but justice to state that the excellent condition of the buildings and the machinery at the pumping station is due to the careful and intelligent management of C. M. Nagle, the chief engineer, and the employes in his charge.

The capacity of the standpipe (five feet by 205,inclosed in a brick tower), is 30 000 gallons. The ordinary pressure is from forty-five pounds to eighty-five pounds. There are over 700 hydrants. Meterage is extensively practised — there being 3.305 in use. These are owned, controled, and repaired by the city. Their use is compulsory only for factories, liverystables. motors, and public laundries. These are thirty-one in number and are mostly of large size. There were 408 meters set for domestic purposes during the year—making 5,026 houses using them. As to the satisfaction given by these meters, the report points out that

no better evidence can be needed on the part of the people who pay for [them] than the number put in. None have been taken out. 1 heir efficiency and economy in the distribution of the water supply is satisfactory both to the board and the people, who voluntarily ordered and paid for them. All the domestic meters are read quarterly and bills renderedall others arc read monthly. * * * The entire cost of keeping the 3,274 meters used for domestic purposes in repair during the year was $299.40, being less than one per cent, of their cost, which was paid by the owners of them. The only cost to the city was the labor of removing and replacing. When repairs were made at the shop labor was charged. 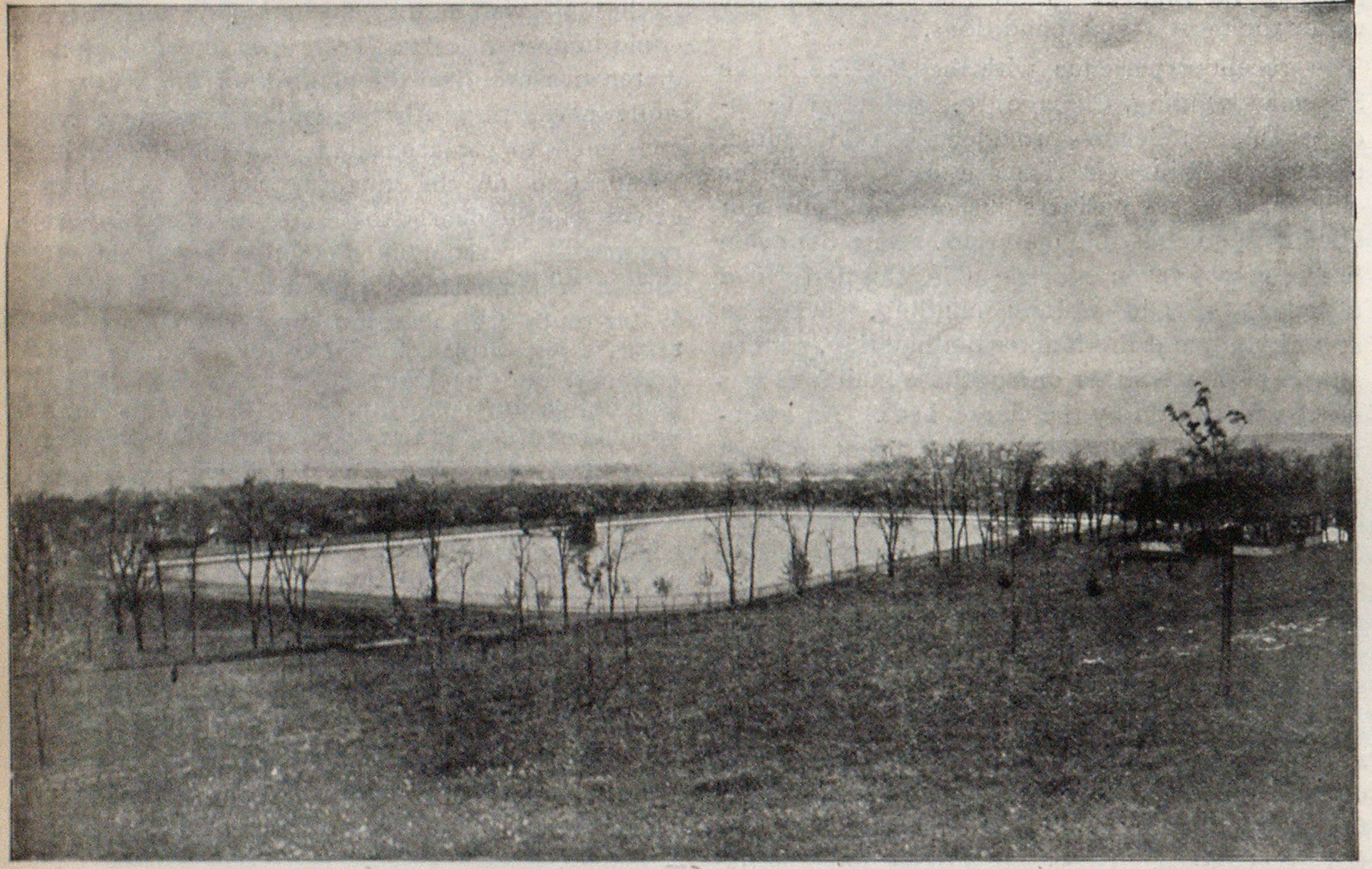 LIKE many other cities in that part of Pennsylvania, Harrisburg, the capital of the State, has suffered from water polluted by coal culm, which,together with the sewage that found its way into the supply, rendered it extremely unwholesome. The culm difficulty has been nearly overcome; the sewage no longer contaminates the water; and, owing to recent improvements in the way of extending the intake pipes, the frictional resistance having been greatly reduced, a full supply will now be secured during very low water.

Last year an ordinance was passed by the city council, authorizing that extension of the intake pipes, thirty inches in diameter, in the river, and appropriating $10 ooo for that purpose. The contract which was awarded to Jacob F. Schlayer, of Harrisburg, included the laying of new pipes and taking out and relaying the old ones outside of the wharf. The work was completed in a little less than two months at a total cost, including bid of contractor, pipe, and all other material and labor, of $5,160.18, leaving a surplus of $4,839.82.

Upon examination it was found that the joints of these pipes were made with rope, which was found to be partially decayed. These joints should have been constructed of material that would have rendered them perfectly tight, especially as they were partly laid in sewage-laden water. Part of the upper line of pipes, for want of support by proper rip rapping, had been pushed down the stream by the current; and this had thrown it more out of alignment than when laid. It was, therefore, determined to take up all the pipes that lay beyond the wharf and in the current. Each of the pities was taken up, scraped, cleaned, and given a coat of a&phaltum inside. About 1. o feet of each line lay buried deep under the wharf from the edge of the river to the well in the engine room. As it could not be taken out conveniently without interfering with the pumping and adding greatly to the cost without any compensating advantage, the first length of twelve feet on the wharf on each bn# was taken out and and a coffer dam built in its place. Thu* the water was shut out at the river end, and by pumping the well empty it was opened at the other end. 1’he outside of the old p’pes was found to be in fairly good condition; on the inside, however, there was in many places a heavy coat of scale and corrosion; in some,a number of carbunc!es;in others, only a few. In those pipes, which lay above and below grade the sand and gravel lay in places from six to eight inches deep. These were scraped and cleaned, but not painted. The lengths of the old pipes from ‘he well were as follows: The lower, 316 feet; the upper. 407 feet. To the lower pipe 294 feet were added: to the upper, 297—totals 6to and “?4 feet respectively.

The pipes were relaid in a bed specially prepared for them— an engineer giving the grade and line for each pipe as it was laid, with a surveyor’s transit placed on the wharf. When it was laid to grade,the joint was made under the personal supervision of Chief Engineer Nagle, who was looking after the work. The pipes are cast iron, with a spigot at one end and a bell at the other. Before the spigot end was entered into the bell, rope gasket was coiled round it just behind the bead and made fast with twine; a piece of one-inch lead pipe, the length of the circumference of the pipe, was flattened on one side, coiled round the pipe, the fl it side against the gasket Behind this lead pipe a ring of wrought iron three inches wide and five-eighths of an inch thick, the circumference of the pipe, hinged in the middle,was put against the large side of the ‘ead pipe. The iron pipe was now slightly raised and the spigot end pushed into the bell; the joint was then caulked tight by driving the lead in with a steel bar and sledge,striking against the iron ring, which was then removed and the caulking completed in Ihe usual manner.

A new cage was placed at the end of the lower pipe—the old one being too small and partly broken. It was made of steel three-eighths of an inch thick,twelve feet long,three feet deep, three feet wide in the middle, tapering at each end to one foot in width. It was laid parallel with the current. The thirty-inch pipe entered at the rear in the centre. The grating consists of eighty-one wrought iron rods three-quarters of an inch in diameter, fastened at the top and bottom by lock nuts. I he spaces between are one-inch. This gives a clear screening capacity of about twenty square feet. It was anchored above and below with wrought iron rods one and one-quarter inch in diameter and eight feet long. At the end of eich rod branenes were driven into the river bed and covered with heavy riprapping. The upper cage was built in a similar manner, and having been in service long enough to have almost destroyed the rods by incrustation, they were replaced w’ith new ones It was anchored in the same manner as the lower one.

Both intakes from the wharf to their ends are protected by rip-rapping from the top of the pipes to the bed of the river. It was placed at an angle of twenty-five degrees above, ard twenty degrees below them. The bed of the lower line was principally composed of gravel, w hile that of the upper one was largely of rock and hard shale, requiring blasting nearly the entire length. The old wharf at t e water house extends about thirty feet beyond the natural flow of the current, and was protected by large cobble stones. This created an eddy below it, into which the sewage would flow and become offensive. The cobble stones were removed back to the flow line and the loose gravel is now gradually being washed away, and in time a straight line will be made and no eddy can form. After careful examination of the river bed, a deep pool with a clean bottom, consisting principally of boulders and shale extending up the river several hundred feet from the pump house, was found and selected as the best point for the termination of the pipes. The old intake pipes, or influents, were laid on the bed of the river without much attention being paid togiade or alignment. The result was that during the low water in many places they were several inches out of the water, which caused an unnecessary amount of friction, making a drop in the well of several inches more than it should have been. The frictional difference between the new and the old intakes is fifty per cent, in favor of the new ones, although they are nearly twice as long.

As a result of the improvement, it was found that on the occasion of the first freshet after the relaying of the intakes—the flood not being enough to carry the water out and round the entrance to the pipes, no culm made its way into the supply. When the second occurred, the water was carried out much farther and a Slight amount of culm, but nothing to nurt, was detected. Ot sewage there was not the slightest trace.