In no one commodity has the American people been more wasteful than in the use of water. A glance over the reports of the various water departments of the country will show a great difference in the per capita consumption of water. Some communities, similar in conditions, use three times as much as others. Why? Is it due to faulty plumbing fixtures, failure to keep pipes in repair or carelessness in the use of water? Some of the waste may be due to poor equipment but the greater part of the waste may be charged to the carelessness and indifference of the consumer. The case of the group of recent immigrants in a large industrial center who allowed the faucet to run continuously during the summer so as to cool bottles of beverages placed in the sink is by no means unique. The idea was to save the price of ice, at the expense of the landlord who paid the water bill. Another example of wasting water by these same people was the washing of bottles by allowing a continuous stream of water to flow into them. The excessive use of water on lawns in suburban districts still further increases the volume of waste on the premises of the water taker. In this respect the municipality is often also at fault in permitting the excessive use of water in public buildings, especially schools, in drinking and ornamental fountains, for street sprinkling and sewer flushing. Further losses are often due to leakage from reservoirs, from the numerous joints of the pipes of the supply distribution and service systems, and from small breaks, the leakage from which does not appear on the surface. All these losses are practically non-preventable, but should not be allowed to continue for any length of time. Other similar practices increase the consumption of water above the normal and entail increased expenditures for additional supplies such as new mains, pumping machinery, etc., with a corresponding increase in the annual expenditures for their maintenance and operation. The experience of the best water systems show that the amount of water required for domestic purposes, in which may be included that used on lawns and in private stables, varies from ten to a hundred gallons per person per day and is dependent chiefly upon the character and mode of life of the individual consumer and the season of water. The ave’rage consumption may be exceeded 50 per cent, or more during days in summer when water is used extensively on lawns, and in winter when the water is wasted to prevent freezing. In the communities where arrangements arc made to account for every gallon of water the amount of water registered by the service meters is less than the measured amount delivered into the mains, the discrepancy amounting to from 20 to 50 per cent, of the quantity supplied. This discrepancy is probably due to errors in the various measurements caused by the slip of pumps, and to losses through leakage front the mains and services and in some instances from unauthorized connections and under registration of meters. The loss, due to leakage from the distribution system, should not exceed about 3,000 gallons per day per mile of main. Experience shows that where meters are not extensively used the larger portion of the waste of water takes place on the premises of the consumers as a result of negligence or wilfulness on the part of the consumer. Every superintendent of a water system should provide checks often on different parts of the water system so that he can see if the amount of waste is above that average. 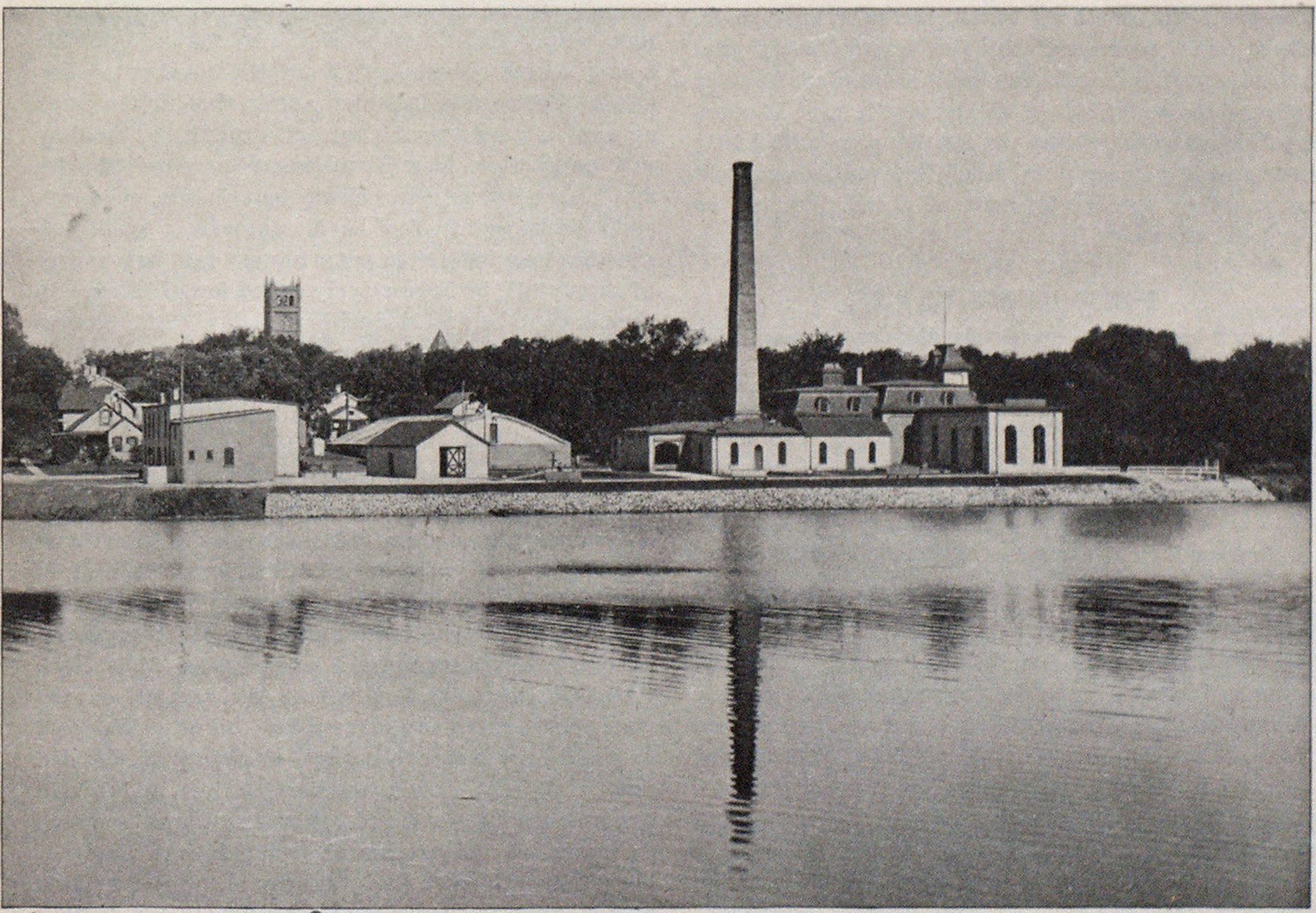 GALVESTON has arrived at a point when her people should begin to be educated as to the value of water, and it will be a great advantage to the future of her water supply.

I will start out with the proposition that the average citizen has no conception of the value of water, and in sheer ignorance allows it to run to waste. This has been demonstrated to be a fact, for it has been stated on the floor of the American Waterworks association meetings year after year as the experience of the different waterworks managers in their several cities. Now this applies not only to those who through ignorance allow a waste of water from their house fixtures; but we have the always careless people. Then we have those who use large amounts of water for which they do not pay, and the other class who do not think it wrong to allow a neighbor to supply himself from their fixtures, as it costs them nothing.

The principal reason for this state of affairs, in the first place, is, tnat, as a rule, when a place is first supplied with water by the public waterworks, sufficient care is not taken to impress upon the people the fact that, although water is “as free as air,” unlike air, it costs something to convey it from where it is to be found to the place where it is to be used. The cost is so much per gallon or thousand gallons in dollars and cents: how much per thousand gallons, depends entirely upon the conditions surrounding the case. In Colorado City, Colo., water is procured from the snow from the mountains of Pike’s Peak, which melts, and, being dammed at a sufficient height upon the mountain, has head sufficient. Therefore, nothing but pipes, valves, and hydrants have to be furnished; no pumps, no fuel, no engineers. At other places, such as Kansas City, Minneapolis, etc., the water has to be pumped several times and filtered. This necessitates a large expense for pumphouses, machinery, etc., besides a yearly outgo for fuel, engineers, etc. I say that the people here can now begin to educate themselves to be careful of tne water, and in this way aid the authorities. For Galveston will very soon urrive at the point when the question of a scarcity of water will present itself. In an article printed in the Galveston News some two years ago I pointed out that, when the time came when the city would own its sewer system, and all premises be connected to the water system, a large additional demand would be made upon the water supply. It is the experience of all waterworks managers that the waterclosets on premises use a much greater amount of water in proportion to other fixtures. One can readily understand how this can be. People have an idea that the more water they allow to run in closets the better; but this is a mistake. A sudden flush of five or six gallons is a benefit,but a continuous stream, such as one frequently sees wasting into the sewer, does no good. I will give some figures here to show how much water may be wasted—not doing a particle of good. These figures are in round numbers.

I do not remember exactly how many drinking fountains there are in the city, but the water at these fountains runs night and day. I think that the openings are at least one-fourth of an inch in diameter. Make the calculation, and you will find that each fountain is a drain upon the system of at least 18,000 gallons in each twenty-four hours. Now find the number of public fountains and you will see what a large percentage of the amount of water pumped is consumed by the fountains alone.

Several cities in my knowledge have employed waterworks engineers to look into the matter of an increased supply of water, which means new machinery, new mains, and additional yearly expense for pumping, etc. These experts have found upon investigation that it was possible to postpone this further expense simply by stopping the extravagant use of water by the people. As I have said above, this is very difficult in people who have not been educated from the first to be careful with their water supply. And verystringent measures have often to be adopted to stop this waste. I feel confident, however, that our people who have in every way shown a desire to aid to rebuild our city, will join heartily in such a simple and easy matter as the stopping of waste on their own premises. There is one difficulty, however, that faces the citizen who wishes to stop the waste upon his own premises, aud that is, that frequently the fixtures are out of order, and,as a plumber will have to be called in, they liave a wholesome dread of taking the matter up, so the water runs merrily on month in and month out.

I have said that the additional connections which may soon be made to the sewer system will make a large demand upon the water system. I am confident that there is enough water now going to waste through fixtures, leaks in mains, and other sources, to take care of this additional demand were the waste stopped. I have not noticed that the ladies have appointed a committee upon waste of water, but hope that they will do so. A plentiful use of wa:er is a good thing. I do not object to that. But even were it not a dangerous menace to the present water supply, which It undoubtedly is, the water allowed to run out of yards and in the alleys and down the gutters is a menace to the health of the city.

I have something to say upon the evil that may result in the near future should the water supply become seriously affected, as it relates to insurance, but this is already too long an article, so I will reserve my suggestions until a future occasion.

John Cownie, of the Iowa board of control, says there is no possibility of the State insuring its buildings. He argues for better buildings and more adequate fire protection.

Indiana may be first to pass Parkinson’s presumptive legislation