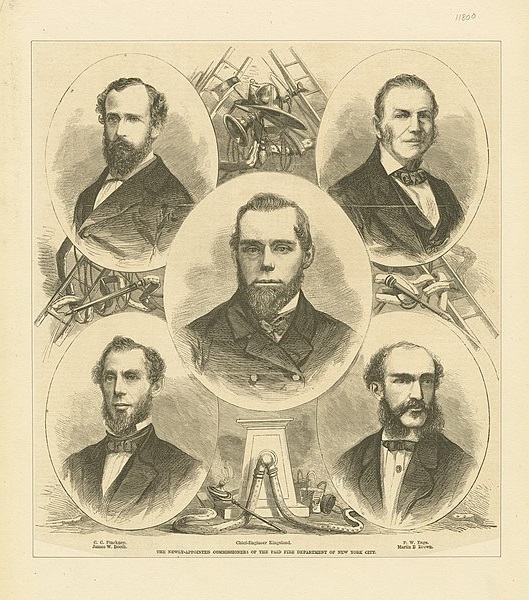 The newly-appointed commissioners of the paid fire department of New York City, circa 1880. (Image courtesy of the New York Public Library.)

During my “probie” days in the firehouse, I heard one of the firefighters call another one a “hair bag” for not cleaning the tools after a working fire. I had no idea of what “hair bag” meant. It seemed to be a word for someone who was not doing what he was supposed do. I didn’t want to ask someone what it meant for fear that I would be called one for asking, so I didn’t. As time went on, I heard a few firefighters being called hair bags; some from different companies, some from my own. I did not want to join that group, even though I still didn’t know what “hair bag” meant.

One day, a department order required all firehouses to throw out company journals that were more than 20 years old. When the Fire Department of New York (FDNY) was established in 1865, Engine 26 was one of the original units, and they had company journals going back to the late 1800s. These journals were stacked to the ceiling in the hose tower. I was assigned the task of throwing out the old journals, but I also started reading some of them. The penmanship was outstanding, more like calligraphy than document writing that recorded daily activities. These journals contained the details of the comings and goings of all company members. I was enjoying reading the history of the company and decided to keep a few to read when I got home. I put all the of the journals in front of the firehouse with the garbage; when I left the firehouse at the end of my tour, took the ones I wanted.

The company journal was and still is considered a legal document. Back in the day, it was the only record of the company’s activities. The information recorded included fire alarm responses, apparatus status, condition of the horses, condition of the firehouse, receipt of official documents, supplies, injuries to firefighters, activities of all members leaving and returning to the firehouse, and even the particulars of any firehouse visitors.

The front page of the company journal contained the home addresses of the company members, with no phone numbers or other contact information. There were 13 members assigned to Engine 26: a foreman (the captain), an assistant foreman (the lieutenant), an engineer (a motor pump operator), an assistant engineer, five firefighters, and four privates.

Most of the company members lived in boarding houses and tenements in what we now know as “Hell’s Kitchen” on the west side of midtown Manhattan. One member of Engine 26 lived on the peninsula of Rockaway, Queens. In the 1890s, the commute home involved taking a ferry from Manhattan to downtown Brooklyn, then a horse-drawn trolley up Flatbush Avenue to Jamaica Bay, and then another ferry to Rockaway. (There was no bridge from Brooklyn to Rockaway until the Marine Parkway Bridge was erected in the 1930s.) That commute must have taken a half a day.

The company had two apparatus: a pumper engine and a hose wagon, each pulled by three horses. The hose wagon was positioned in front and responded to the initial alarm; if needed, the pumper engine would follow. The horse’s stables were in the rear of the firehouse (where many kitchens are now are located) and, on receipt of an alarm, each horse was led into position under their harnesses, which were attached to the ceiling and dropped onto them. The company journal recorded many drills timed by chief officers timing, with three to five minutes being the standard acceptable amount of time. When the time exceeded six minutes—which was very rare—I noticed there were frequent follow-up visits by Chief Campbell. Members were proud of their abilities to respond quickly to an alarm, and they even recorded local politicians and citizens witnessing the operation.

As I read through the company journals, I discovered there were many antiquated daily routines. Some of them sounded pretty good; one was exercising the horses. Firefighters were famous for taking care of their horses, covering them with blankets during multiple-alarm fires in cold weather and grooming them with care. Exercising a proud, spirited horse must have been a grand sight for the young ladies and an easy way to get a conversation going.

Something that sounded like fun was “theatre detail.” Each live show required a firefighter to be present to transmit the telegraph alarm in the event of a fire and help with crowd egress. Engine 26’s administration district included West 42 Street, which featured many theatres, so several members from the company went to the shows (I assumed no hair bags were given this choice duty). Also, members did not eat their meals in the firehouse; the company journal was full of stories of members going out for breakfast, lunch, and dinner. The work schedule was an incredible 10 days on with one day off. This must have put a severe hardship on the members’ families. It’s hard to imagine working 10 days continuously before getting a day off. Even in the late 1800s, this would have been considered a brutal schedule.

Many of the early firefighters were unemployed sailors. Steam ships were rapidly replacing the labor-intensive sailing ships, resulting in high levels of unemployment for many sailors in New York City during the late 1800s and early 1900s. These sailors were accustomed to long periods of hard work, enduring incredible physical challenges sailing ships across the open seas with few family comforts; thus, they were a good fit for living a life away from home in a firehouse and capable of performing hazardous work in all weather conditions. Sailing ships was one of the most complicated tasks of the time and demanded good teamwork to overcome the dangers of sinking in a storm. One can imagine a group of ex-sailor firefighters regaling each other while sitting around the potbellied stove, telling tales of raging seas with “all hands on deck”; this is where the phrase “all-hands fire” originated. These tough, competent men laid the foundation for the FDNY’s high standards and great reputation.

All this brings us to the handle you never want attached to you in the firehouse: hair bag. Old pictures from the late 1800s show groups of firefighters with their horse-drawn apparatus, most of them clean shaven, except for some mustaches and sideburns worn long (a look that still has its followers). So, grooming was recognized as an activity that had to be maintained, and trips to barber for a haircut were considered necessary and recorded regularly.

While reading through the company journals, I noticed that one name—Firefighter Morrison—came up quite often; for most other members, getting a haircut was an infrequent event. There must have been a desire by some to make up reasons to get out of the firehouse after Day 7 or 8 of a 10-day shift. Getting a haircut was not so much to look good as it was for, perhaps, a chance meeting with a wife or sweetheart or just to take a walk around the city.

Returning to quarters after going out for a haircut, a firefighter was required to present the officer with a lock of cut hair in a bag as proof of seeing a barber, not the love of his life; hence, the term. If a firefighter was not around the firehouse performing maintenance chores or, worse, if he missed an alarm for a fire while supposedly out getting a haircut, this would lead to this particular individual being called a hair bag.

And so it goes. Old expressions are kept alive without any relative meaning to the current social conditions. So, hold your horses (at a busy traffic intersection); take a blow (an old sailing expression “to leave a location” like the deck of a ship and go below to rest); and show up on time at the firehouse ready to go to work, so you won’t be called a hair bag.

Howard J. Hill is a third-generation firefighter and an assistant chief (Ret.) for the Fire Department of New York (FDNY), where he was a 35-year member. He is also the author of “Failure Point: How to determine the Stability of a Burning Building,” which contains key elements that warn of imminent fire-induced collapse, risk management strategies to prevent injures to firefighting personnel on the fireground, and how building codes influence fire-induced collapse. As FDNY assisant chief, Hill created a safety officers course that became mandated training for all FDNY chief officers. He has lectured nationally on risk management for the fire service; a managing committee member, overseeing the complete revision of the New York City Fire and Building Codes; and chairperson for the fire protection committee during the creation of the 2008 NYC Building Code. Hill has also taught a building construction and life safety systems course at John Jay College; was the project manager for FDNY symposiums, which provided training for fire department personnel from across the country and around the world; and recently conducted a best practice review of high-rise firefighting procedures for the city of Bogota, Colombia’s, fire department. He can be contacted at hwrdhill@aol.com.