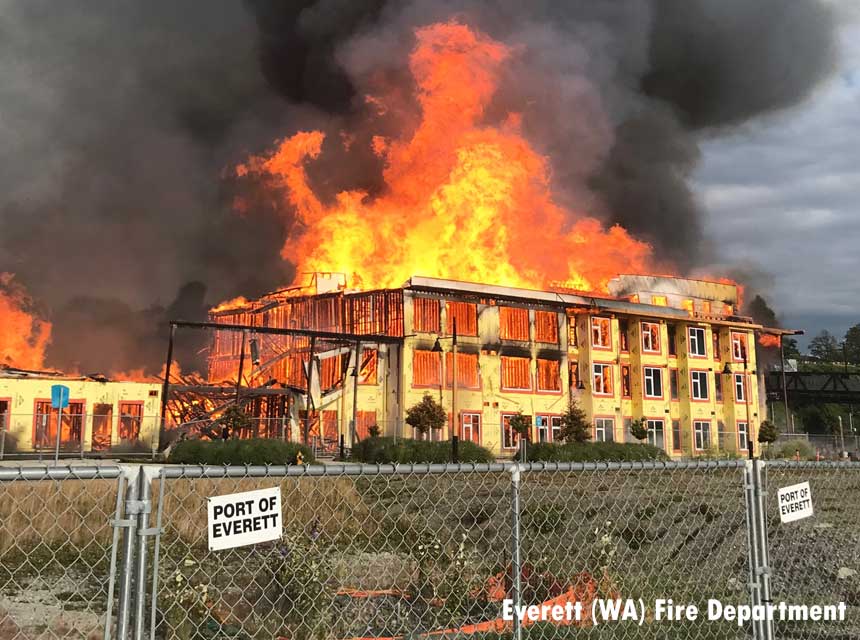 On Thursday evening, July 16, 2020, at around 5:45 p.m., Everett (WA) firefighters responded to a four-alarm fire at the Waterfront Place Apartments, which are currently under construction in the 1300 block of W Marine View Drive.

Multiple 911 callers reported a fast-moving fire at one of the buildings under construction. Fire units arrived to find one of the two buildings, the south building, fully engulfed with fire, which was rapidly spreading. Defensive tactics were established to fight the fire.

Fire and embers were blown in an easterly direction across W Marine View Drive, which started trees and brush on fire along the bluff above W Marine View Drive. Embers started a roof and attic fire to a home in the 1600 block of Rucker Avenue. Flying embers also caused smaller spot fires around 16th and Grand Avenue and 16th and Rucker Avenue. Firefighters worked hard to get the house fire and the spot fires under control and prevent them from spreading to other homes.

Size-Up and Tactics for Structures of Lightweight Construction

There were two fire apparatus, a ladder truck and an aid car that sustained damage due to the intense heat of the fire. The heat caused the ladder truck’s windows to blow out, and both rigs were burned, and components melted or warped on each vehicle. One firefighter received minor burns to his hand as he was moving the aid car to prevent further damage to the apparatus. He was transported to Providence Regional Medical Center for treatment.

For safety reasons, the power was cut in the area by Snohomish County PUD, while firefighters worked the fire, which has since been restored.

The trains were stopped in the vicinity of the fire. Everett Fire and BNSF maintained contact to ensure there were no safety concerns.

Fire apparatus remained overnight to address any hot spots. Fire investigators from the Everett Fire Department, Everett Police Department, and the ATF will partner together to investigate the fire due to the high dollar amount of damage. It is too soon to know what caused the fire.