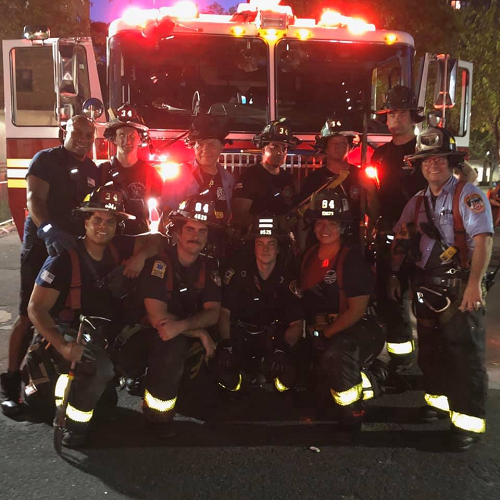 MANHATTAN – Firefighters were dispatched to the Polo Ground Houses, a New York City Housing Authority building on Saturday, just after 6:30 p.m. for an apartment fire.

“As we approached the building, we saw smoke coming from the top floor. Before we arrived on scene, we had reports of people trapped inside.

We went up to the 30th floor of the high-rise building and set up our position. Our members went in before we established a hose line because we knew people were trapped inside.

Lieutenant George Diaz and Firefighter Gerardo Urena, Ladder 34, began to knock down some of the fire when they heard people screaming. They began to make their way towards the back of the fire apartment.

Lt. Diaz found more individuals and was able to remove them from the building. Firefighter Urena found two more people in the back room, but due to the increasing fire in the apartment decided to isolate himself with the individuals in the back room until the fire was put out.

Our members inside were able to knock down the fire and clear a visible path for Firefighter Urena and the two people who were trapped to safely exit through the interior of the building,” says FDNY Lietuenant Thomas Donoghue, Engine 84, who along with members of Ladder 34 was on scene of an all-hands fire in Manhattan yesterday evening.

FDNY Battalion Chief Christopher Ritchie, Battalion 13, says, “There were a total of five rescues that took place at this high heat, heavy smoke fire. The communication between our members was fantastic. Everyone was on point. All the companies on scene were reporting in and everyone was doing exactly what they needed to do to make sure this all went right. Training is a very important life-saving tool, and we do it constantly in order for us to make quick decisions based on the circumstances around us.”