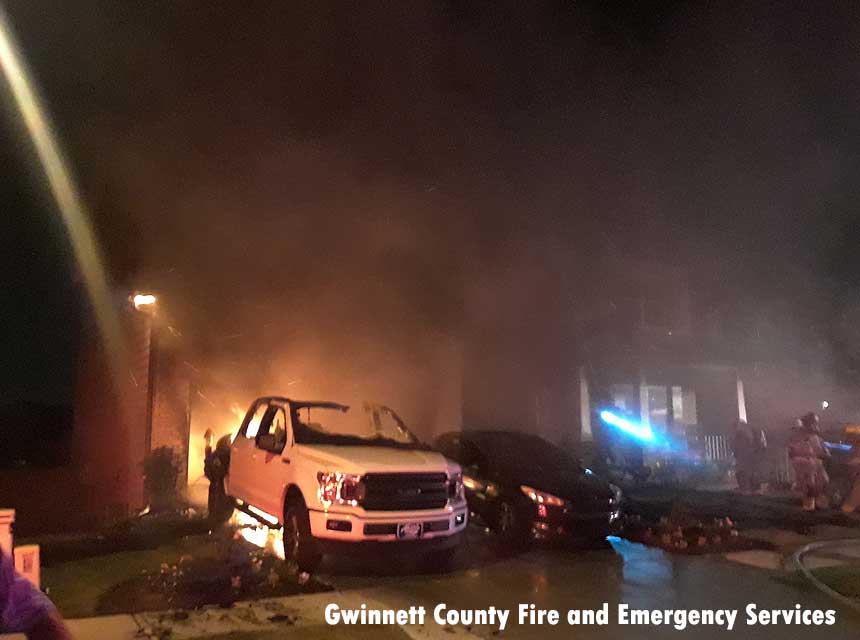 Firefighters responded at 11:09 p.m. on August 9, 2020, to an occupant report of a house fire in the 3500 block of Tupelo Trail NE, according to a release. The 911 caller advised the garage was on fire and everyone was out of the home. Additional callers advised vehicles in the driveway were catching on fire.

Crews arrived on scene and found heavy fire involvement in the garage of a two-story home on a basement. The flames were quickly spreading to the living areas of the home and two vehicles parked in the driveway. As a walk-around of the home was completed, firefighters rapidly deployed a 2.5-inch fire attack hoseline to knock down the bulk of the fire from the exterior before making an aggressive interior fire attack.

As crews advanced multiple hoselines inside the residence, they were met with heavy fire on the first floor and brought it under control quickly. This allowed additional firefighters to advance a hoseline upstairs and check for fire extension above the garage. While the fire was being brought under control inside, another hoseline was deployed to extinguish a fully involved vehicle fire in the driveway.

Ground ladders were placed against the front side of the home as a secondary means of egress for firefighters. Primary and secondary searches found no victims and all occupants were accounted for with no injuries.

The fire caused extensive damage to the main floor of the home sending smoke and heat upstairs to the second floor. The basement sustained heavy water damage. One vehicle inside the garage was completely destroyed along with a pickup truck in the driveway. A third vehicle sustained moderate damage in the driveway. All utilities for the home were secured.

It is believed that two pet lizards did not survive the fire. No injuries were reported.

According to a resident, he was upstairs when the smoke alarms alerted occupants. He checked the basement and then returned to the main level and found smoke coming from the garage. Upon making entry into the smoke filled garage, he could see the fire in the back-left corner and attempted to extinguish with a fire extinguisher from the doorway. When the extinguisher was ineffective, he left the home and attempted to extinguish with a garden hose from the exterior but was unsuccessful. A total of six people including two adults and four children have been displaced by the fire and denied assistance from the American Red Cross.

A fire investigator responded to the scene for origin and cause determination. According to the fire investigator, the fire originated in the back-left corner of the garage and the cause is undetermined. A cause electrical in nature could not be ruled out at the time of the investigation.