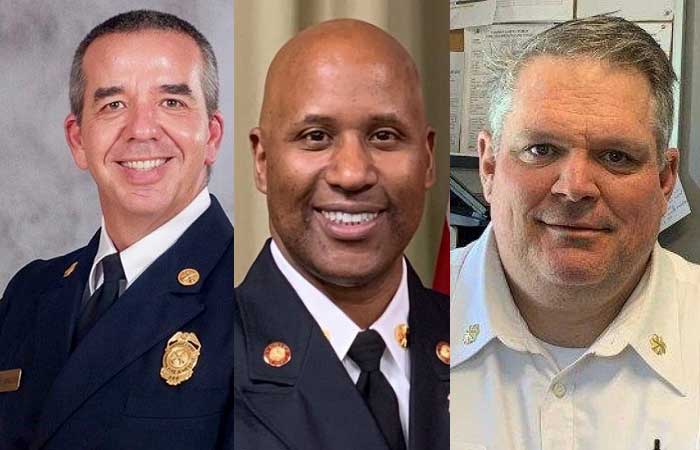 
CHRIS LANGLOIS was sworn in as the new chief of Leland (NC) Fire/Rescue (LFR) on August 24. Langlois joins the LFR after serving 20 years with the Omaha (NE) Fire Department, most recently as battalion chief. Langlois was the 2014 Nebraska Society of Fire Service Instructors Instructor of the Year, has presented at FDIC International, and has written extensively for Fire Engineering magazine.


JOSEPH McHUGH was named the new chief of the Greenwich (CT) Fire Department (GFD). He will leave his position as a battalion chief in the Bronx with the Fire Department of New York, where he has worked since 1991, to take over the job. McHugh began his career with the Sound Beach Volunteer Fire Department in Old Greenwich, where he served as a firefighter and later as a lieutenant. McHugh replaces previous GFD chief Peter Siecienski, who retired in May.


DANIEL ZERFASS was named the new chief of the South Beloit (IL) Fire Department. Zerfass has served with the Highland Park (IL) Fire Department for 30 years, eventually rising to the rank of lieutenant. From 1988 to 1996, he served in the Air Force Reserve in fire protection (crash/fire/rescue). Zerfass will take over the position from Michael Davenport, who is retiring after spending 33 years with the SBFD.


JERRY LYNN was named the new chief of the East Side Fire District (ESFD), which serves residents and property located east of Lake Coeur d’Alene, Idaho. Lynn, an Idaho native, has volunteered as a firefighter and an officer for the past six years with the ESFD. He takes over the job from Dan Currie, who is retiring and was credited with increasing the ESFD’s fire suppression abilities.

STEPHEN D. HALFORD has been appointed chief of the Clayton (MO)...