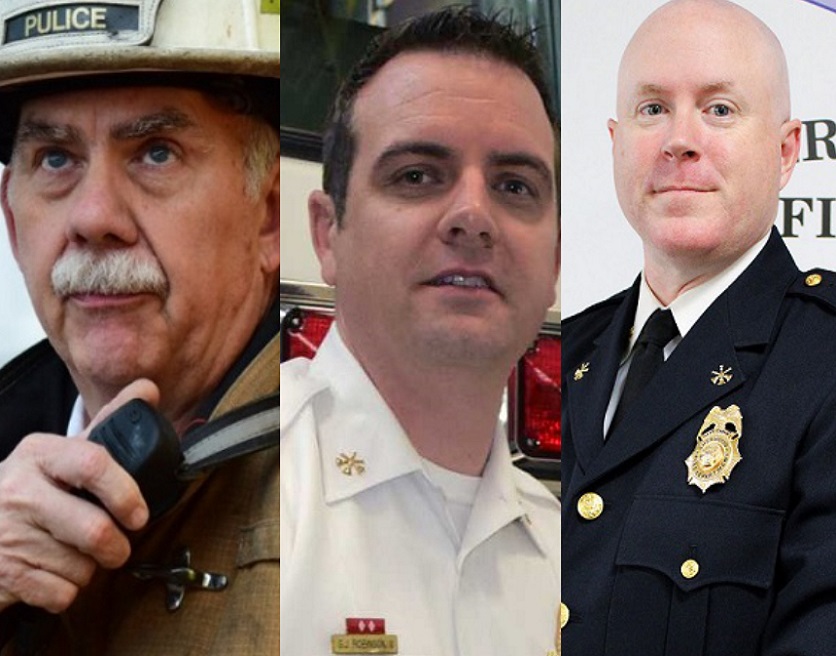 
JOHN SAWYER was named the new chief of the Sherwood (AR) Fire Department (SFD) effective January 1. He succeeds previous SFD chief David Teague, who retired. Sawyer joined the SFD as a volunteer in 1995, becoming a paid member in 1999. Since then, he has risen through the ranks to become a captain in 1999 and battalion chief in 2012. Sawyer has been recognized numerous times as Firefighter of the Year by the Sherwood Fire Department, Sherwood Rotary Club, and the City of Sherwood.


STEVE PULICE will be sworn in as the new interim chief of the Clarksburg (WV) Fire Department (CFD) on January 4. Pulice will take over the position from Richard Scott, who retired. Pulice, who was previously a captain with the CFD, has served with the department since 1984 and has steadily moved up through the ranks. He is also a West Virginia State Certified Fire Service Instructor.


GRAHAM “JIM” ROBINSON III was named the new chief of the Greensboro (NC) Fire Department (GFD). He will replace current GFD chief Bobby Nugent, who will retire on January 31. Robinson III joined the GFD in July 1995 and was previously its deputy chief of emergency services. Robinson III has also served in the GFD’s training and special operations divisions as well as emergency management. He has also been on multiple local, state, and national committees.


TIMOTHY SMITH was named the new chief of the Falmouth (MA) Fire Rescue Department (FFRD). He had been serving as the acting chief since July 2020, when former FFRD chief Michael Small retired. Smith is a 33-year FFRD member, starting as a firefighter/paramedic, then moving up the ranks to lieutenant, captain, and then deputy chief, a position he held since 2012.  Smith began his career as an 18-year-old volunteer firefighter in Pawtuxet. He then joined the U.S. Coast Guard, working as a health services technician at Joint Base Cape Cod.


KENNETH McCORMICK was named the new chief of the Pembroke (MA) Fire Department (PFD). He has been the interim chief for the past several months after Mike Hill retired from the role. McCormick, a Pembroke native, started with the PFD in 1988, becoming a full-time firefighter there in 1994. He said his first priority on the job is getting through the pandemic, as one-quarter of the PFD has been hit by the virus. McCormick also said he will focus on staffing, new facilities, and public outreach.