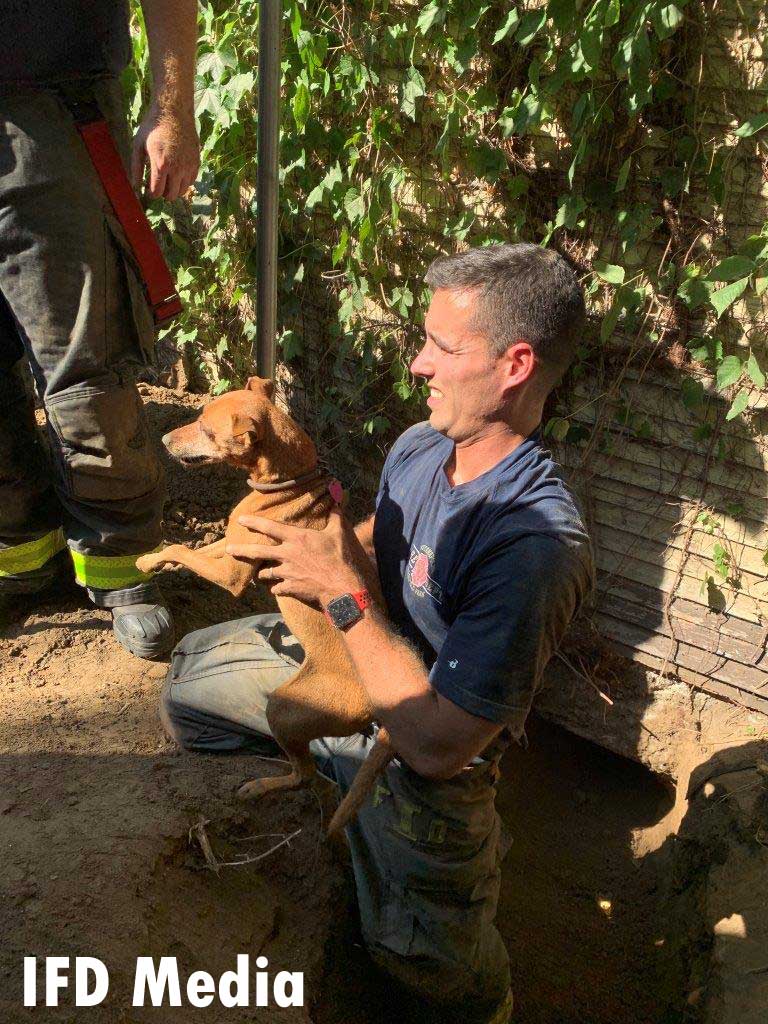 After hours of search and rescue efforts by Indianapolis Fire Department (IFD) Station 29 A Shift, a six-year old red miniature pinscher was rescued after crawling into a gopher hole, getting stuck, and spending close to 24 hours underground.

Around 5 p.m. last Thursday, a couple discovered that their rescue dog named Penny was missing. They searched Penny’s usual explorer hideouts to no avail, but shortly before midnight he heard Penny whimpering near a detached shed in the backyard. It was unclear at this time if Penny was above or below ground.  Further investigation found that Penny had most likely tunneled through an open gopher hole near the neighbor’s shed and gotten stuck underneath the concrete slab. The couple spent the next several hours trying to coax Penny out, by using her favorite foods, salmon, and sausage. Nothing worked.

Just after shift change, on Friday around 8:00 a.m., the couple sought help from IFD Station 29, located across from their home near Garfield Park. After an assessment by local animal control authorities, Station 29 requested additional assistance from the IFD Special Operations Division. With available information at hand, Special Ops Chief Kevin Jones requested firefighter Engineer Chris Hemphill from nearby Station 7 to assist with the rescue effort. Both Jones and Hemphill are members of Indiana Task Force 1 where Chris is a technical search team manager, trained on the use of the “360 First Look Rescue Camera.”  Chief Jones’s initial thought was to use the camera to try and get Penny’s exact location underground.

Through the use of the camera and Hemphill’s expertise, Penny was successfully located subsurface at about 2:15 p.m. She was five feet from the opening of the gopher hole and about two feet under the slab. Engine and Ladder 29 spent the next three hours carefully digging out the area, under the slab, near Penny’s presumed location.  The crew was exhausted but determined.   It appeared that the area that Penny crawled into “caved in” once she passed through and the dirt was blocking her exit. With careful consideration to ensure no firefighters were injured, the crew reassessed their efforts with each foot of dirt. The continued use of the camera allowed them to keep an eye on Penny’s condition as they worked.  The closer they got – the louder her whimpers got.

William Tinkler from Engine 29 got the grab and brought Penny to safety. The family expressed their gratitude to all involved, and Penny was taken to a local animal hospital to be checked out.