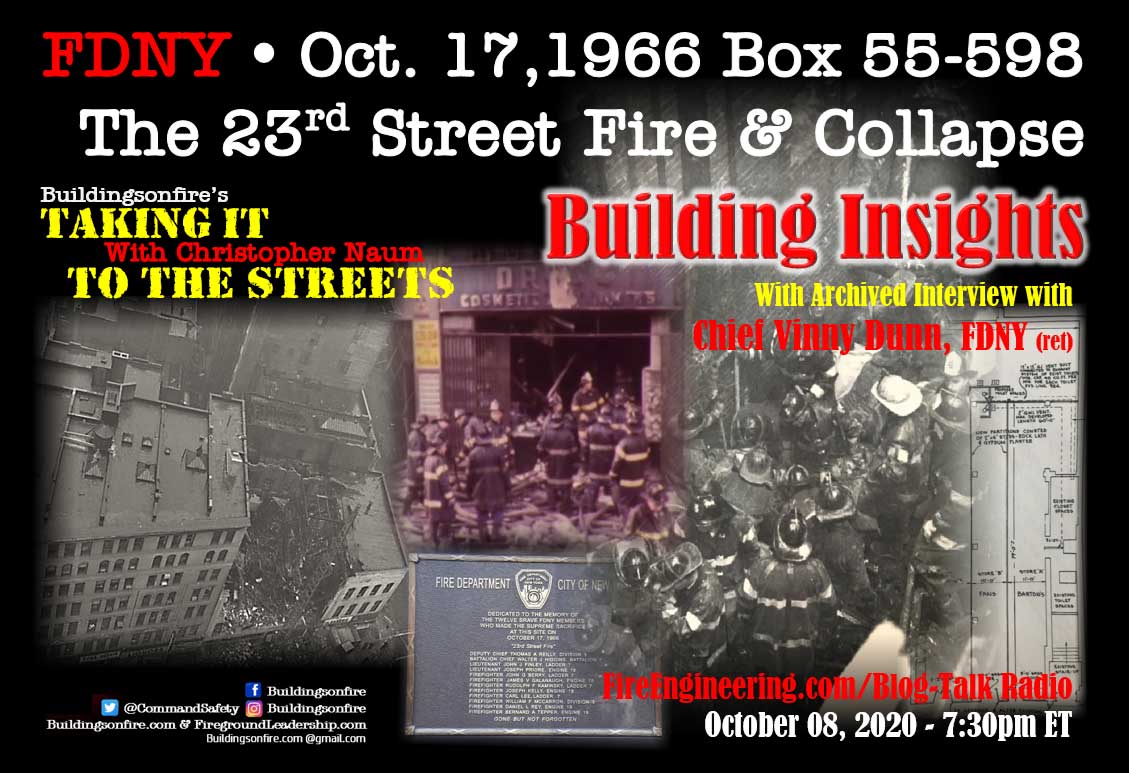 Buildingsonfire’s Taking it to the Streets will discuss insights on the building and its performance that contributed to the structural collapse during fire operations that resulted in 12 Fire Department of New York (FDNY) firefighters and officers losing their lives during operations at Box 55-598 at what is known as the 23rd Street Fire that occurred on the evening of October 17, 1966.

Included in this program will be archived excerpts from our 2018 special podcast that I had the privilege of hosting with special guest Deputy Chief Vinny Dunn, FDNY (ret) and Assistant Chief Joe Pronesti, Elyria (OH) Fire, with Chief Dunn sharing his first-hand accounts as the Lt. of E33 operating at the fire and our discussion on the lessons learned that resonate today for operations at Type III (Class 3) Buildings and Occupancies

Manhattan Dispatch recorded an alarm from a resident at 7 East 22nd Street for smoke on the 4th floor of a brownstone. Box 0598 was transmitted at 2136 hours. Engine 14, 3 and 16, Ladders 3 & 12, Battalion 6 and Division 3 turn out. Upon arrival, they were confronted with a cellar fire at 7 East 22 Street. Heavy volume of smoke & heat was pushing from the art dealers’ cellar & 1st floor. Deputy Chief Reilly transmitted the All Hands at 2158hrs, Rescue 1, Battalion 7, and Field Comm are on the way. At 2209 hrs, Chief Reilly transmits the 2nd Alarm, fire has extended to exposure 2, a three-story, brick, L-shaped at 940 Broadway and exposure 3, a five-story brick commercial loft building at 6 East 23 Street.

Engine 18 and Ladder 7, under the direction of Chief Reilly and Higgins, were all unaware of the intense fire conditions that were directly below them. Suddenly, without warning, a 25-foot section of the rear of the drug store on 23rd Street collapsed, hurling 10 FDNY members to their death in the inferno below. Two other firemen trapped on the first floor by a burst of flame caused by the collapse also were burned to death.

Incident insights are posted on FiregroundLeadership.com.

Subscribe to the FDNY PRO and spend some time reviewing the short film produced by the FDNY Foundation titled “My Father’s House“ for an honored perspective of what Never Forgetting, honor, tradition, and remembrance truly mean: http://www.fdnypro.org/films/.

Podcast: Taking It to the Streets: The 23rd Street Fire

The best way to keep up with Fire Engineering? Get our regular e-Newsletter: www.fireengineering.com/enewsletter

Listen in the player above. Also, get every episode by subscribing to the Fire Engineering podcast using your favorite podcast app.

Podcast: BuildingsonFire: Taking It to the Streets: Commercial Fires

Podcast: BuildingsonFire: Taking It to the Streets

Podcast: Buildingsonfire: Taking It to the Streets