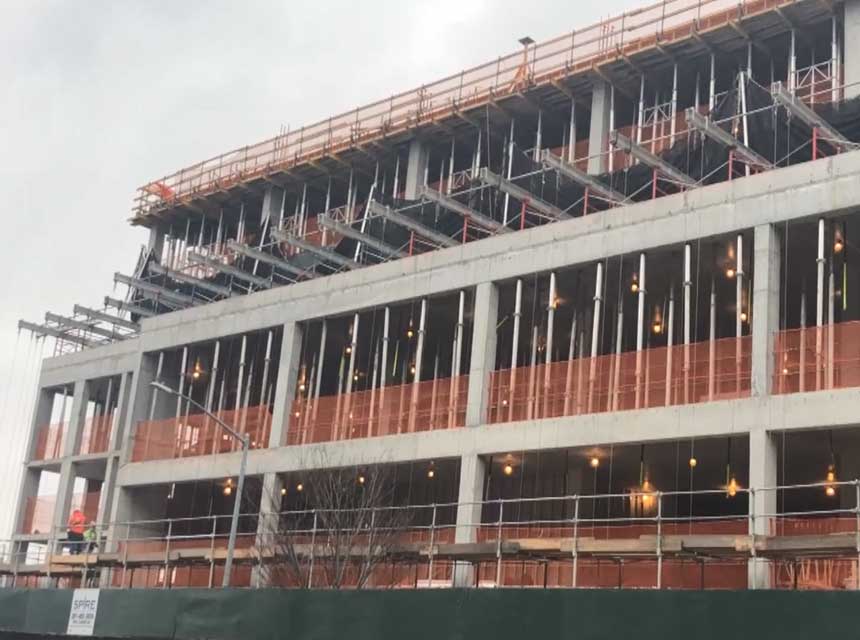 Anytime you have a large construction project in your response area, don’t be afraid to stop and take a look at what’s going on. A simple introduction to the staff inside the construction trailers can be a pivotal move for any officer to gain information on the construction or renovation in progress and glance at the blueprints. Meet with the site safety supervisor and assess where the standpipe and siamese will be during construction. Although a fire might be one of your first concerns, a construction accident can happen more frequently and may be a more difficult operation. This is especially true when you consider all the trades working among each other and the materials being used at these sites: steel, concrete, form work, and metal shores, to name a few. The building may have a “caged elevator” running up the outside as the building begins to rise from the ground. There will be times when an elevator isn’t functional until a certain stage of construction, so expect that you will be climbing on homemade ladders that can be very steep and difficult to navigate on when carrying equipment and especially when trying to remove an injured worker.

Concrete Tilt-Up Buildings: What You See on the Outside Is Not What You Get on the Inside

We received a call for an injured construction worker at a high-rise building site where we previously operated below grade. We weren’t sure where he’d be located, given the building was already four stories high. As we arrived on scene, the site safety supervisor was still trying to ascertain the location, and we wanted to know immediately so we could get the tower ladder to that location to assist in the removal.

Once we got initial information that he wasn’t pinned but injured, both the engine company with their emergency medical equipment and the truck company with hand tools proceeded together through the maze of brace shoring at the concrete-poured structure while the apparatus stood fast until we got a confirmed location. Ducking beneath the metal panel forms and cross-braces and then into a vertical void with rebar jutting out of the floors to a few homemade ladders from floor to floor was reason enough for all members to wear their personal protective equipment.

Once on the floor, we found paramedics who arrived prior to us and were taken to the area by other workers already tending to the patient, who was under the cross-bracing and between vertical shoring posts. Since his injuries required immobilization, a backboard and stokes basket were called for, but we needed a better size-up of the layout of the site to figure out our best options.

At the previous incident, the crane on scene was able to lift a firefighter and victim in the stokes basket out of the subcellar using the appropriate rigging equipment. Unfortunately, the crane was on the opposite side of the building; the flooring was being framed in rebar, which was a tripping hazard; and it was a maze to attempt to get to that location.

After conducting an exterior wall size-up with the safety supervisor, we could see that the setback floors, safety netting, and scaffolding would prohibit a tower ladder or an aerial device from accessing the area of operation. However, a safety scaffold set up on the adjoining parking garage’s upper deck on the nearest exposure would allow us to cross over the parapet and drop down about three feet to the planked deck.

The apparatus positioned at the garage entrance and we called for a stokes basket, a backboard (with pretied webbing attached to it), rope and rigging, and a 24-foot extension and 20-foot roof ladder. These items were transported in the freight elevator to the top floor of the garage. We raised the ladders to the scaffold and opened the roof ladder’s hooks and deployed it into a plank that ran as a curb stop on the scaffold. The angle would be perfect for us to lower the stokes basket on this ladder. Other firefighters used the extension ladder for access to get on top of the scaffold.

Now that we had our equipment on the scaffold, we handed it over to the other firefighters on the opposite side of the parapet. Once they diamond-lashed the victim onto the backboard, they slid him out from under the confined space into an open area so they could diamond-lash him into the stokes basket. During the securing process, members had to use caution that they didn’t snug the tubular webbing down too hard on the victim’s shoulder, which showed signs of a traumatic injury.

Once the victim was secured, members carried him over to the parapet and handed him over to the firefighters on the opposite side. Then the stokes was secured with rope at its top so it could be slid down the roof ladder. Once the stokes was placed onto the roof ladder, two members operated the rope, lowering it slowly while another member climbed down the ladder supporting the base of the stokes. Another firefighter climbed down behind that firefighter, supporting him because he had one hand on the stokes basket and the other on one rail of the ladder. Even though the hooks were deployed on the ladder and biting into the plank, a firefighter still heeled the ladder during the removal process. As this was being done, the paramedics were able to climb down the extension ladder and continue patient care once they got onto the parking garage deck and then into the elevator to the street level.

Although we may not perform diamond-lashing or stokes basket removals often, we need to be prepared for situations that call for them. Keep in mind that you can deploy ladders in many situations other than fires; they may offer more strength and stability than the ones we might encounter at construction sites.