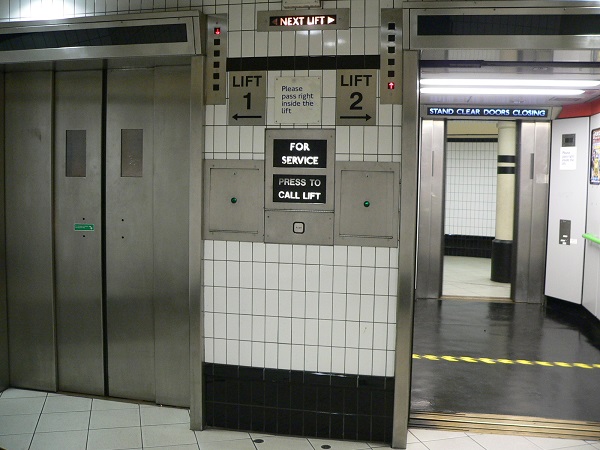 The first step is to become familiar with the features of elevator construction and their operational features. Following are some common terms used when operating at elevator rescues.

Alarm switch. Also known as the “Emergency Call” button, this is an electrical switch inside an elevator car on the control panel that will activate an alarm bell. Some elevators will have just a push button, while others have a pull-out activation switch.

Blind elevator. Also called “express elevators,” this elevator type does not stop at every floor in a building; it may only stop every 10 floors or more.

Drop keys. This is a long cylindrical key that is hinged toward one end of the key with a flat drop piece of metal. It has a “T”-style handle on the opposite end of the key and is used to open the hoistway doors. The drop key is inserted into a small hole in the upper area of the hoistway door and is slid into the hole. It is rotated until you feel it hit the rod or closure assembly. It is then rotated to release the hoistway door from the closed position. There are numerous styles of elevator rescue keys dependent on those found in your area. Your department should equip you with the proper tools.

Elevator car control panel. The panel located inside the elevator car. This panel contains the emergency stop bottom, the alarm switch, the “Open Door” and “Close Door” buttons, the floor selection buttons, the firefighters service switch or key, the maintenance service switch, and the floor display. Communication equipment is often located on this panel.

Elevator keys. These keys are used to control the elevator’s movements. Firefighters’ service keys are the most common and which can be different from one jurisdiction to another. Many times, these keys are controlled by local ordinances.

Emergency stop button. This is electric button, when activated, will stop the elevator car in the hoistway. An alarm bell may ring when it is activated.

Express elevator. This elevator that travels directly from the ground floor to a sky lobby or bypass numerous floors in high-rise building.

Hoistway. This is the shaft inside a building where the elevator car moves up and down.

Hoistway doors. These doors are attached to the hoistway shaft. They are visible from the elevator lobby, which may either be a sliding design or hinge-type door that usually opens outward from the car.

Sky lobby elevator. This elevator is used in high-rise buildings where elevators start at the ground level and end their service at a higher floor level (but not at the top floor). At that higher floor, passengers must exit one elevator and move to another elevator that services only the higher floors of the building. The elevator lobby where this move is made is known as the “sky lobby.”

When people find themselves in a stalled elevator, they will usually try operating it by activating every button on the elevator control panel, hoping they can get the elevator moving again. When they find this effort to be unsuccessful, they will contact the local 911 office with their cellphones or they may activate the Emergency Alarm switch; this will usually lead other building occupants to call 911. The 911 office will then notify the local fire department.

Where you work or your department’s response plan to elevator emergencies may differ from the following plan, which is a response pattern that my department follows for an elevator rescue.

An elevator rescue operation requires firefighters to operate at different levels of a building remote from one another. A response of one engine, one ladder, a chief officer, and an emergency medical services unit is necessary for safe and coordinate operations. Each fire company will have a responsibility all its own that is interdependent with the operations of other fire companies. Communication between all companies is key for a successful operation.

The responding engine company should arrive and enter the building with all the necessary equipment they it will need to successfully remove occupants from the elevator car. The firefighters should be in full personal protective equipment (PPE) [without self-contained breathing apparatus (SCBA)], and have elevator keys, a drop key, rescue rope, hand lights, wood chocks, a portable radio, and a standard tool kit.

RELATED: Avallone on Securing Power to Elevators ‖ Leihbacher on the Use of Elevators at High-Rise Fires ‖ Havel on Elevators: Power Shunt Trip

The responding ladder company should also arrive and enter the building with all the necessary equipment they may need. Depending on the situation, the firefighters should be in full PPE (without SCBA) and have elevator keys, a drop key, building keys, a six- to eight-foot pike pole or hook, elevator poles, a halligan tool, hydraulic forcible entry tool, hand lights, portable radio, and wood chocks. If you need a 10-foot folding ladder or a 14-foot roof or straight ladder is needed, the driver can bring that into the building when he is called . (Note: Many departments run short staffed, and we can’t bring everything in initially. You must size up the situation; we are not pack mules, and carrying all the equipment in for a simple drop key removal—where the car is level with the floor—is not good practice for companies running thousands of calls a year.)

The responding chief officer should arrive ready to take command and coordinate the actions of the engine and ladder company. The chief should be in full PPE (without SCBA), and have a portable radio. A clipboard is helpful for documentation, coordination, and accountability. The chief officer should also establish command at the location of the stalled elevator car.

The EMS unit should stand by at the location of the stalled elevator car ready to provide medical care for any injured or panicked elevator occupant OR firefighter (if something goes wrong). In most cases, it is unlikely that the occupants of the elevator will be injured, but the experience could bring on other medical emergencies like panic attacks, cardiac issues, fainting, breathing difficulties, and overheating, to name a few. The companies operating at the location can quickly get a picture of the conditions inside the stalled elevator car by talking with the occupants. Reassuring the occupants is important.

The engine company officer should initially report the location of the stalled elevator car to all companies, then establish a dialogue with one person in the stalled elevator car. Once a dialogue is established, the engine company officer can work with that person to evaluate the condition of the occupants, reassure the occupants that the fire department is there ready to evacuate them quickly, and perform a system check as directed. This system check may reboot the elevator car.

The group that is charged with opening the elevator doors and removing the occupants will work with the engine company on the floor of the stalled elevator. The ladder company will use drop keys to open an elevator hoistway door. From there, open the elevator car doors attached to the stalled elevator car. The ladder company can use a pike pole, an elevator stick, or any variety of tools that can be used to trip the rollers that control the opening and closing of the hoistway and elevator car doors when working from or above/below the stalled elevator car or next to an adjoining car. Excessive force is not usually required to open these doors and, in most cases, very little effort is needed to move these doors to the side. Heavy forcible entry tools will only be needed in rare cases such as when there is a broken assembly rod or closing device.

Once all the occupants are removed from the elevator, close all hoistway and elevator doors and terminate the power. If exterior hoistway door is broken, secure it by using chocks to wedge it closed, then ask maintenance if they have a piece of plywood to put over the doorway and ensure security is present if none of these actions work. Notify an elevator service contractor to respond and the building maintenance personnel instructed not to restore the electrical power. At this point, all fire department operations have concluded, and the firefighters can return to their companies.

This guide to elevator rescues is for the most common types of elevators encountered in most buildings. Expand this operational plan for other types of elevators such as freight elevators, blind elevator shafts and sky lobby elevators, for example. Tactics will become more complex for elevator rescues where only roof or side access is available for firefighter access to the stalled elevator car. Regular visits to buildings equipped with elevators will allow firefighters to become familiar with machine room locations and elevator configurations. Making these visits and developing a relationship with the building maintenance staff is time well spent. Company officers should consider these visits in their company drill and firefighter training program.

Fire Service Stays for the Fight