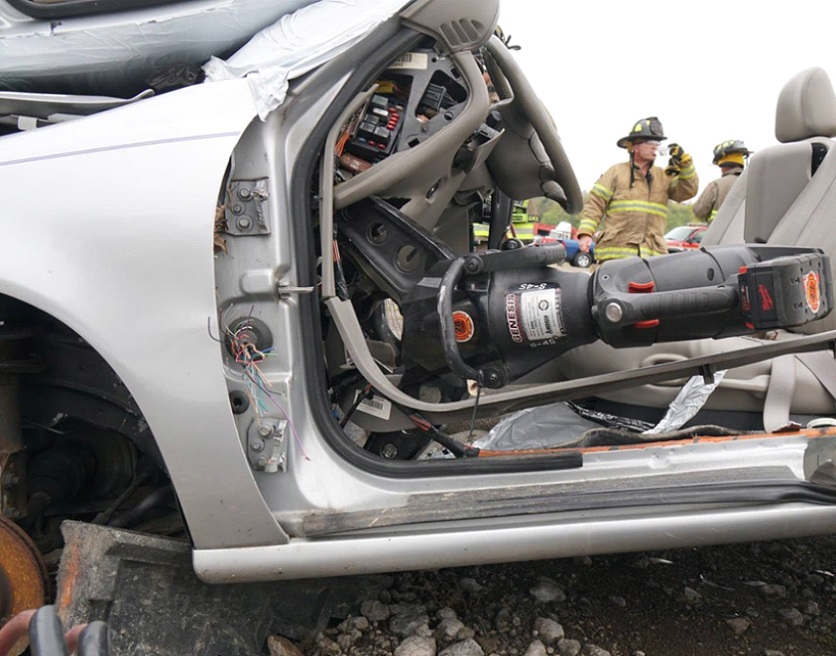 For years, we have lifted and rolled the dashboard off victims trapped in motor vehicle accidents and (if you are old enough) pulled the steering column. Sometimes, we blend these efforts to get those precious few inches that make the rescue. Most of these techniques involve making relief cuts so the tools work more effectively, these cuts can take up precious time.

Fortunately, we have come across another technique to add to this menu of rescue tactics.

The best part of the “No Relief Cut-Dash Lift” is that it has fewer steps and takes less time in freeing the victim. The dash is pushed up between the “A” posts by spreading between the ground and dashboard crash bar. You do not need to cut the A posts, rocker panel, or fenders for this technique to work. Aim the upper arm of the spreader at the horizontal crash bar that runs through the dashboard.

Position the lower spreader arm so it has a strong foundation from which to push; you will need to support this with cribbing. If the lower anchor/push point fails, move on to another technique.


Next, line the lower tip of the spreaders on the floorboard, supported by a chock or cribbing underneath, and aim the top spreader tip to scrape along the panel to go deep enough into the dash to catch the dashboard crash bar.


Establish a solid load path to the ground for the lower spreader tip and aim the upper tip to catch the horizontal crash bar and fire wall connection. Note the lack of relief cuts.


In all our testing, we did not have to do any progress capture. When the tool is removed, very little downward movement of the dash is noted. The tool is removed easily, clearing the path for the patient.


The upper spreader tip should make contact at the connection of the side wall to the crash bar. You can see where the bolted connection has broken off; the crash bar is being pushed by the spreader, levering the dash assembly up and away from the victim.

Note the step chock location supporting the lower spreader tip so the spreaders energy is transmitted to the crash bar/dashboard.


You can perform this cut one side at a time or in parallel.

Removing a dashboard from a victim can be a complicated problem with many variables. We need to have just as many answers, so add this technique to your list of potential solutions.

Watch the below video to see this cut in action:


Steve Shupert has 35 years public service. He retired from Miami Valley Fire District in Montgomery County, Ohio, and serves as a rescue team manager for Ohio Task Force #1 Federal Urban Search and Rescue. Shupert is also the chair of the FEMA Rescue Sub Group and the director of training for 501c3 Crash Course Village in Kettering, Ohio.