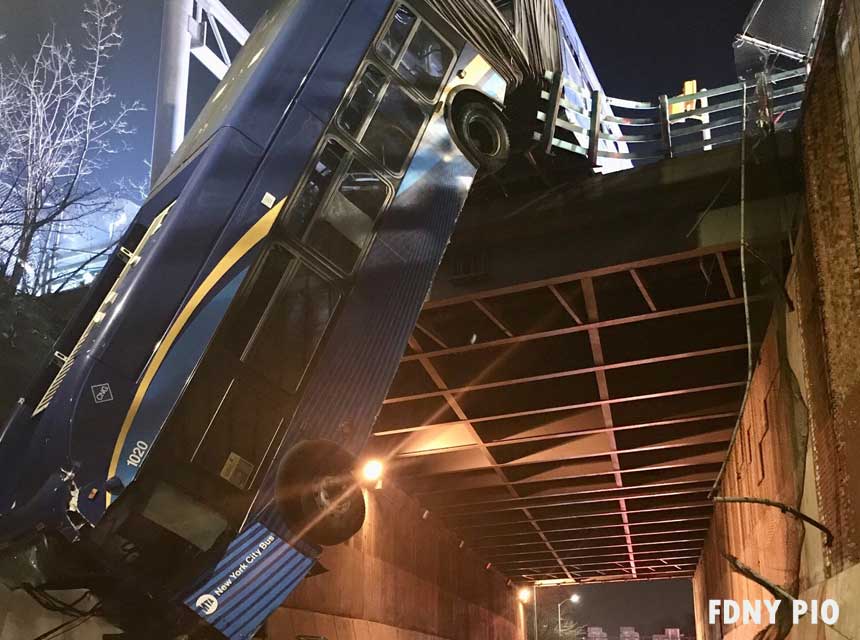 Fire Department of New York (FDNY) members responded to the scene after a tandem bus crashed through a barrier onto a lower roadway at University Ave and the Cross Bronx Expressway.

The tandem bus was left hanging off the overpass onto the roadway below. There were nine civilian injuries reported early in the incident.

“While responding to this incident, I began discussing the information we were receiving, picturing a bus hanging off the edge. We had two scenes here where  Rescue 3 began securing the bus up-top while Engine 43 made their way around to begin treatment of the civilian patients. Currently we are making sure all the fuel and other hazardous materials within the vehicle is secured until the bus can be pulled onto the roadway,” said FDNY Acting Battalion Chief Steven Moore on an Instagram post.

FDNY Deputy Chief Paul Hopper, who oversaw emergency medical treatment and transport at this incident added: “We assessed and treated a total of eight patients from this accident. The bus fell approximately 50 feet onto the access road. The patients suffered injuries consistent with a fall from such a great height.”