The weather forecast was bleak for the Hampton Roads area on April 13, 2020. Heavy rain and high winds with gusts between 50 and 70 miles per hour blasted the area for much of the morning. The members of the Chesapeake (VA) Fire Department (CFD) went about their morning at the firehouses as usual, with apparatus checks, daily station chores, and breakfast. These were interrupted by the daily responses that make up nearly 30,000 calls annually for the department.

The CFD consists of approximately 450 career firefighters, paramedics, and fire officers who protect roughly 240,000 people in a 250-square-mile area of southeastern Virginia known as Hampton Roads. The fleet includes 17 engine companies, three truck companies, one heavy rescue, three battalion chiefs, three field medical officers, 13 advanced life support/basic life support ambulances, and numerous support apparatus operating out of 15 firehouses. Mutual-aid agreements are in place, and an automatic mutual-aid agreement is also in effect for areas where cities border each other. The incident that was about to happen would show the value in these mutual-aid agreements and the joint training that is conducted throughout the year.

“Tractor Trailer Over the Side”

At 0841 hours, the Chesapeake Emergency Communications Center (known as “Chesapeake” on the CFD radio) received a report of a tractor trailer truck that had partially gone over the side of the High Rise Bridge—the cab was over the side with the trailer on the bridge (photo 1). This bridge spans the Elizabeth River and connects the city’s east and west sides. It is on Interstate 64 and handles roughly 74,000 vehicles each day. It is currently undergoing renovation to widen it to better accommodate traffic. 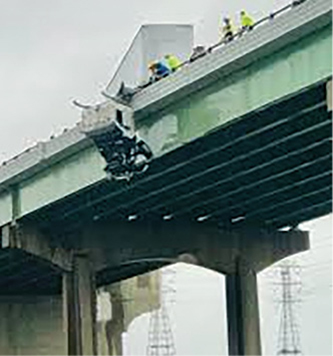 Initial dispatch included a technical rescue response of Battalion Chief (BC) 3 Shean Emmons, EMS 3 (field medical officer), Engines 8 and 28, Ladders 2 and 12, Rescue 15 (heavy rescue), and Medics 8 and 2. BC 3 requested the assistance of a 60-ton rotator wrecker truck and a regional technical rescue response consisting of the Virginia Beach (VA) Fire Department (VBFD) and the Norfolk (VA) Fire Department. BC 1 was also responding and added Fireboats 1 and 2 for potential rescue/recovery from the Elizabeth River.

EMS 3 arrived on scene first and provided the following size-up: “Tractor trailer over the side, one occupant in tractor, this will be an extensive technical rope rescue.” Additional first-due units arrived on scene but were blocked from the scene by multiple police units that had tied up access to the incident. A face-to-face transfer of command took place; Emmons took command of the incident from EMS 3, and proper interdepartmental notifications were made of the incident.

The Physics of Rope Rescue Operations

Further investigation found that the truck’s saddle fuel tanks had been punctured and fuel was leaking into the river. The U.S. Coast Guard was then contacted.

The trailer, which was empty, was stabilized using chains and Ladder 2’s apparatus as the anchor point; Ladder 2 approached the scene from the opposite lanes. Ladder 12 was directed to approach from the wrong direction, park in front of Ladder 2, and begin setting up a rope system for rescue using its apparatus as the anchor point (photo 2). The Rescue 15 crew assisted Ladder 12, and Firefighter Justin Beazley donned a Class 3 harness, a main line, and a belay line to perform the rescue of the tractor driver. EMS units were staged and positioned to depart the scene as needed with potential patients. 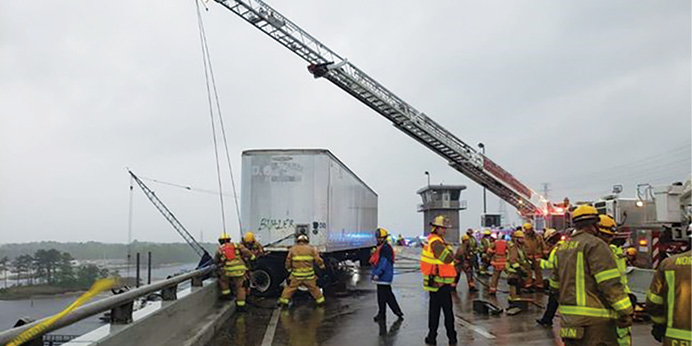 While these operations were taking place, additional personnel were in constant verbal contact with the driver to ensure he remained calm. Water rescue resources (CFD, Chesapeake Police, and Coast Guard vessels) were also in place below the bridge on the Elizabeth River for a potential water rescue.

The incident action plan to use Ladder 2 for stabilization and Ladder 12 as an anchor point for a rope system was put in place. The thought process was to use two separate ladder trucks: In the event the tractor was completely blown over, it wouldn’t take the rescuer with it. Emmons assigned an extrication officer and a safety officer.

The 60-ton rotator cranes and VBFD and Norfolk had not yet arrived. Once on scene, they were assigned to assist with secondary stabilization with winches and the rotator arms. Stabilization consisted of securing the tractor frame back to Ladder 2 using grade 80 chains and chain binders. VBFD Rescue 2 winched to the rear of the frame and secured the rear of the trailer using chains to bridge the decking. Personnel on the bridge passed a harness to the driver and instructed him to don it and remain in the cab.

Once all units had arrived on scene, stabilization was completed. A low-level Z drag with an inline change of direction and elevated change of direction using Ladder 12’s aerial was set up as the main line. A belay line was also set up and attached to Beazley, who was loaded into the system and lowered over the side, approximately 70 feet above the waterline, in high winds and hail (photo 3). Beazley assisted the victim with getting into the rest of the rescue harness and then attached himself to the victim with a set of “4’s” (photo 4). 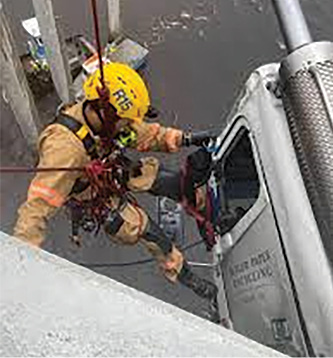 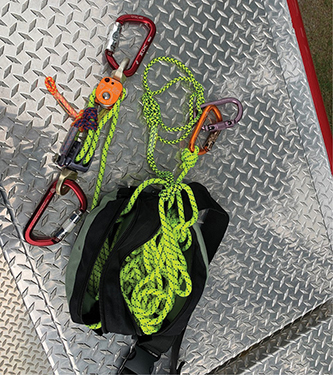 With the victim secured and attached to the rescuer, both the rescuer and the victim were lifted up to the bridge and over onto the safety of the bridge surface. The victim was then placed in the care of Medic 2 and transported to a local trauma center with nonlife-threatening injuries. Operations to further remove the truck were halted for about 20 minutes until the dangerous weather passed the region. On-scene crews then provided the wrecker companies with a safe working area by blocking traffic and providing additional staffing while they removed the tractor to the bridge roadway. The scene was transferred to the command of the Virginia State Police, and all fire department units cleared the scene. It took 1 hour 6 minutes from the time of dispatch to placing the driver on the roadway, remarkable considering the conditions present.

This incident proved that regional training among specialty teams (technical rescue, hazmat, marine) is invaluable. The skills, equipment, and personnel were not new to anyone on scene because of past training drills. There is continual need for qualified ladder company and rescue company personnel in the technical rescue disciplines. You must have the properly trained people in the right spots every day.

Given the weather conditions, the unique position of the tractor cab over the edge, the position of the victim, and the challenges in getting fire department units to the scene, the rescue was still performed in a little over an hour. The rapid establishment, implementation, and execution of the incident command system established order and guidance throughout this incident. The results are evident by a successful rescue, no injuries to operating members, and very minor injuries to the driver. This was truly “heroism on the High Rise.”

Greg Sellers is a senior firefighter with the Chesapeake (VA) Fire Department, assigned to Engine 11/C shift. He is also a volunteer firefighter for the Smithfield (VA) Volunteer Fire Department. He is an instructor in engine and truck operations and a 28-year veteran of the fire service.

NTSB Chair Wants Tesla to Limit Where Autopilot Can Operate