Impalement emergency training has been trending in the field for the past decade and continues to gain momentum. The Man vs. Machine kits are on the rise in firehouses around the country. The fire service trains on the fundamentals of firefighting including stretching lines, conducting searches, opening up, and forcible entry. Many may argue that today’s fires are on the decline but that emergencies are still on the rise. Impalements are low-frequency/high-risk incidents, so why not continue the conversation? This type of scenario may be presented in a variety of ways, such as an incident that involves a foreign object entering a body and preventing the body from continuing movement.

The first step in handling such an incident is to start the conversation with your crew. Let’s be honest; just because it hasn’t happened in your jurisdiction doesn’t mean it’ll never happen. It’s only a matter of time before this type of incident occurs, so it’s best to consult with your medical resources when creating a plan to deal with impalements. 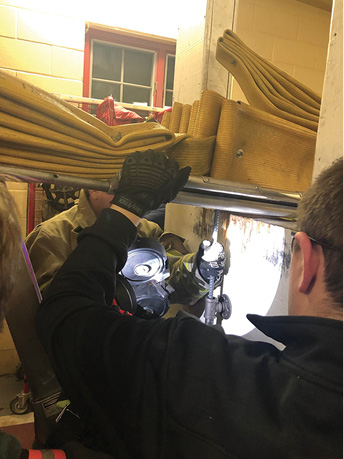 (1) Teamwork is vital during incidents involving impalements. In some situations, the person making the cut may not be able to see and will have to rely heavily on the partner’s point of view for completing it. (Photos by author.) 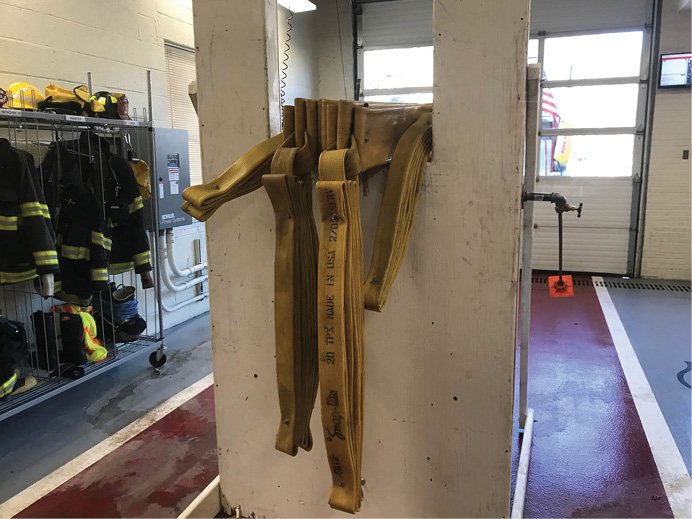 (2) A basic window bailout prop was converted into a window impalement scenario using basic pipe fittings that can be purchased at most hardware stores.

Training Minutes: The Effects of Different Tools During Impalement Rescue

What is the object? Will you be able to mitigate the incident so the patient can be transported? What are the width and composition of the object? Is it the standard street sign post, ½-inch rebar, or a larger light post? Each of these objects has its own criteria—for example, securing the power to the light post before cutting it. Is your equipment capable of cutting through the material? The portable band saw is a great option, as it is maneuverable and the continuous motion of the band creates less vibration. If you’re using a reciprocating saw, do you have the proper blade? If you’re using a hydraulic rescue cutter, are you prepared to potentially mitigate the “snap effect” of the material?

Where is the object? Address this question from two perspectives. The first is the accessibility to the impalement. Is the patient impaled in his car on an accessible roadway or out in the backwoods of the mountains? Consider also the physical accessibility of the tool. Depending on the impalement, will you be able to get the tool between the materials to make the cut to package the patient? A portable band saw can handle a single piece of rebar; however, when cutting an ornate steel fence apart, you may not be able to fit the portable band saw into the two-inch gap between the slots. You have to be prepared to go to plans B, C, and D and switch to another cutting tool. 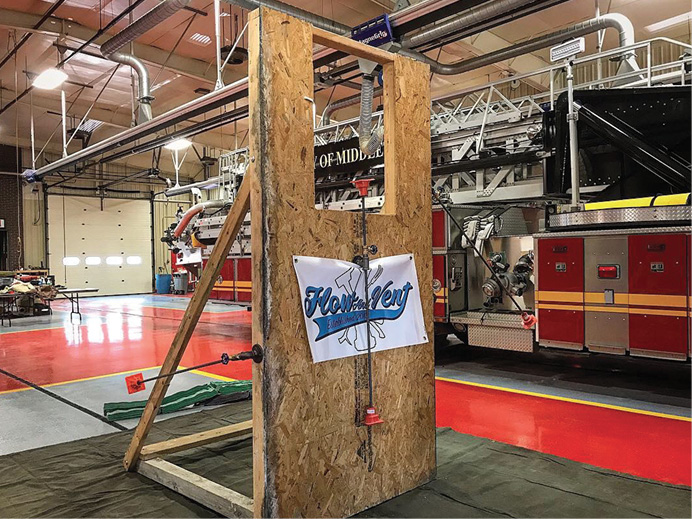 (3) This prop has multiple attachment points that enable members to practice cutting materials in various positions. 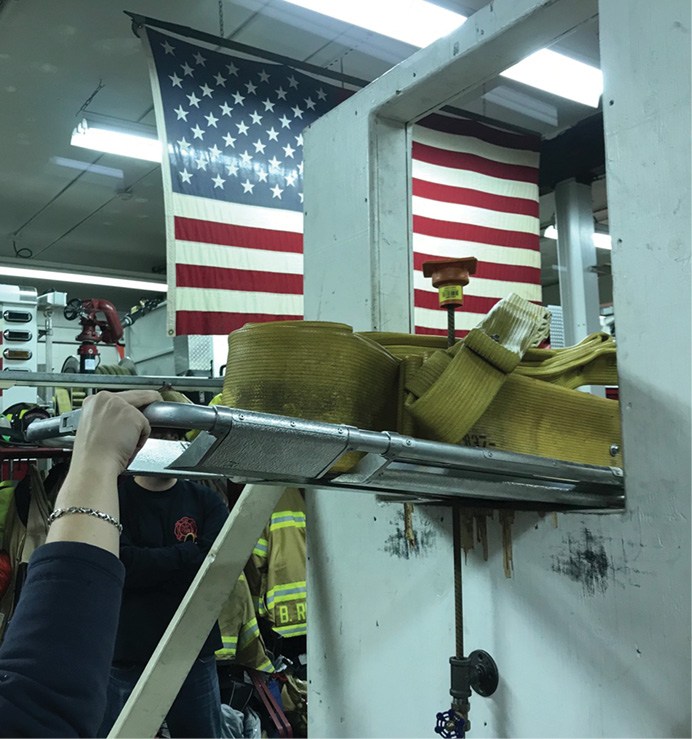 (4) Having a good understanding of medical moving equipment will enable you to capture the weight of a patient during different scenarios. Here, the scoop allowed the manikin to be captured during stabilization prior to making the cut.

The second perspective of accessing the “Where” is the location of the impalement on the patient. Is the patient impaled in an extremity or in a cavity of the body? This is important because prior to the arrival of advanced medical care, the company will have to conduct a trauma assessment to develop an operational plan. Some considerations may be controlling potential bleeding and managing and packaging the patient. If the patient is impaled through the foot while in a standing position, there is less potential for serious internal injuries than if he had a center mass impalement.

How did the impalement occur? This component may be applied in all phases of incident response. Was the patient deliberately impaled by someone or was the impalement an accident? The scene size-up is a critical factor in creating the best odds for mitigating the situation. For example, if the material fell off a higher plane such as scaffolding and left the patient impaled at level ground, one of the considerations should be to investigate the material at its origin to secure the scene for rescuers to operate below. The situation and your standard operating procedures (SOPs) will dictate how you respond and operate at these incidents, but don’t forget to use common sense.

Once it is deemed necessary to proceed with the operation and there is a plan to mitigate the impalement, you must pack the patient. Whether the patient can be transported to the hospital in an ambulance depends on how much of the foreign object must be transported. Make sure that the packaged patient can be transported in the ambulance. Carry a tape measure in your kit or toolbox. Determine how much of the object can be taken down to best package the patient into the transporting ambulance, especially when the impalement involves a fence or another larger object. These incidents are critical, and attention to detail is paramount. Discuss with your crew and others operating on the scene what the game plan is. Measure twice, cut once, and don’t create more work on scene. Spending unnecessary time on the scene will take away from ensuring that the patient is in the operating room within the hour.

Mitigate the injury according to the location of the impalement on the patient’s body. One way to mitigate massive blood loss through an extremity is to use a tourniquet. First responders have been using the tourniquet more often lately. Whether it’s a tourniquet on the market or a cravat and dowel, consider adding the device to your arsenal of equipment. The basics of first aid are very relevant during this stage of the incident. Once the tourniquet is applied, stabilize the impalement if the situation allows. Some methods include creating a “ring donut” of gauze or using copious amounts of stacked gauze to stabilize the foreign object. Don’t overlook the basics of personal protective equipment, such as gloves and protective lenses. A rescue incident will typically involve the human body in a precarious position; protect yourself, your crew, and your patient. Always operate within your training and SOPs.

Take the example of someone who attempted to make it over a fence, fell, and impaled his lower leg on a fence. This patient has to be stabilized with another object such as a small collapsible ladder to prevent the leg from hanging. This position will enable the patient to breathe better. After, rescuers can work on securing the foreign object to the leg before making the cut. Always consult the highest medical authority on scene when operating. This brings up the concept of company interoperability and how you may operate with potential mutual aid at these incidents.

Right away, we know that we will be working with emergency medical services during these incidents, whether its basic or advanced life support. Law enforcement will likely be there to assist with crowd and evidence control. There may be potential for a field surgeon to respond from the local trauma center depending on the nature and extent of the patient’s injuries. Mutual-aid fire and rescue companies that specialize in these types of rescue operations also have the potential to respond depending on your SOPs and mutual-aid agreements.

Before the incident occurs, have a conversation with everyone and conduct a tabletop to get the gears turning. After that, have all the companies understand each other’s training and equipment limitations by hosting a familiarization event. Next, conduct training with all these groups so that whenever the alarm for impalement goes out, it won’t be the first time responders work together.

To prepare to handle an impalement, consistently train and converse: Could our company handle an impalement? What would we do? How would we get the patient packaged for transport, and what would we use? If we need additional resources, whom do we call? These are a few of the many questions to ask when training for these incidents. Don’t forget the basics of rescue operations and first aid when handling such incidents.

ROBERT POLICHT is a member of the Passaic (NJ) Fire Department, where he is assigned to Ladder Company 1. He began his fire service career as a volunteer for the Allendale (NJ) Fire Department, where he served as a captain and training officer. He is a member of the IAAI and ISFSI. Policht has an M.A. in emergency management and homeland security from Arizona State University. He is a founder of and contributor to Flow and Vent.