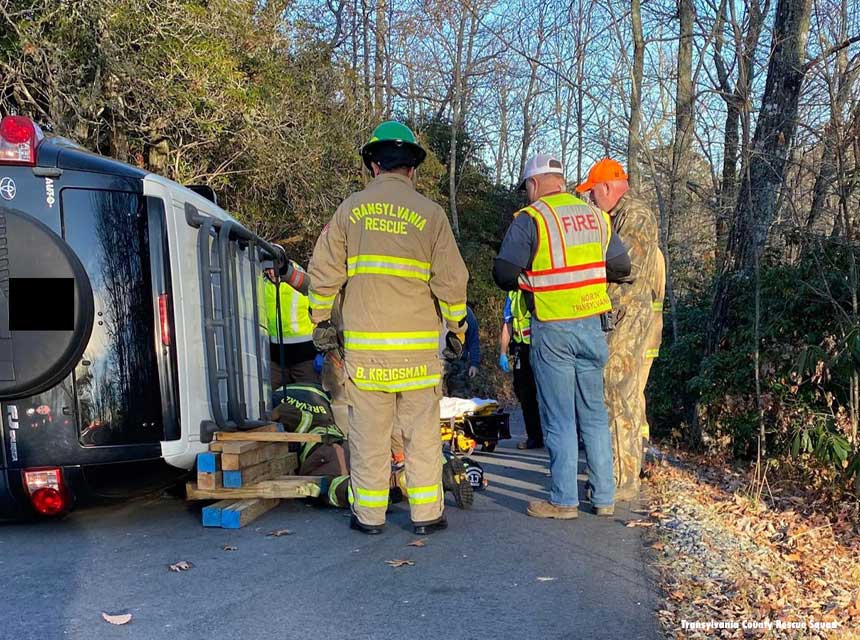 What appeared to be a simple one-vehicle rollover presented rescuers with a grisly challenge Saturday, Nov. 27, in North Carolina’s mountainous Transylvania County.

Someone in the SUV apparently had an arm out the vehicle’s window at the time of the crash.

“Crews arrived on scene to find an SUV rolled onto its side with one person trapped inside,” the squad wrote on Facebook.

“The victim’s arm was pinned between the vehicle and the pavement requiring the vehicle be partially rolled.”

It happened Saturday on a narrow road in the Mills River area, about 110 miles west of uptown Charlotte.

Rescuers quickly evaluated the situation and realized the SUV was at risk of rocking back and forth atop the person’s arm, so they “worked to stabilize the vehicle on its side.”

Once that was done, they began offering medical treatment — while the victim was still trapped.

The team then tried doing “a controlled lift raising the vehicle and freeing the victim’s arm.”

“Once freed, the victim was able to be extricated from the vehicle and treated for their injuries,” officials said.

The identity and condition of the crash victim were not released and officials did not say how long the person was trapped.

Puppy jumps from capsizing boat into frigid water, then gets stuck under Alaska cliff