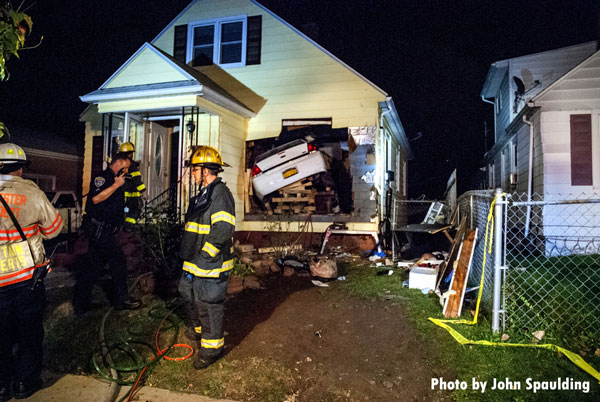 SEE PHOTOS FROM THIS INCIDENT >>

Photos and report by John Spaulding

On October 8, the Rochester (NY) Fire Department (RFD) was called by the Rochester Police Department (RPD) after a car they attempted to make a traffic stop on took off at a high rate of speed. RPD did not continue the chase, but soon after found the car in the bedroom of a single-occupancy dwelling not far from the original location.

Three men ran from the scene, and two were quickly apprehended, and the third was still at large. The home was occupied by a couple and their adult son. The car went airborne due to the front yard being shaped like a ramp and the high speed involved. The vehicle came to rest on top of the sleeping couple. The woman was removed quickly and transported to a local hospital.

RFD Group 2 dispatched a full rescue assignment including the hazmat truck and two special operation units. In all, Battalion Chief Dupra reported that it was the equivalent of a second-alarm assignment in a rescue configuration.

RELATED: Vehicle Rescue Training for Firefighters: Stabilize the Vehicle | Wood Shoring Systems: How Do They Perform?

Crews went to work to stabilize the vehicle with cribbing. A cut station was set up nearby to continue making the correct size pieces. Air bags were used to complete four-inch lifts to accommodate the next level of shoring. They encountered a new challenge as the car cut the chimney in half, which then fell on the front of the car. Each lift shifted the chimney slightly. The regional medical director, Jeremy Cushman (Car 906) arrived on scene to assist Rural Metro paramedics. An extra ambulance was staged for the rescue operation as well.

After one hour and 40 minutes of time, they freed the victim, who remained conscious through the entire ordeal. Battalion Chief Dupra said that gasoline nor hot engine parts were a factor in the rescue.