May 22, 2019, began as a positive day for the Jefferson City (MO) Fire Department (JCFD) and the roughly 43,000 residents of Missouri’s capital city. The fire department was enjoying the culmination of a significant investment in time, energy, and financial support, ending with the opening of a new firehouse on the east end of town. Even as the members of the JCFD were riding the wave of good will that often accompanies completion of a significant project, they remembered that May 22 is also the anniversary of the deadly EF-5 tornado that leveled a significant portion of Joplin, Missouri, eight years prior. The fire department chaplain commemorated this day by praying for the residents of Joplin during his invocation at the dedication ceremony for the new station. At that moment, the attendees were unaware that the severe weather that haunts the Midwest each spring would visit its wrath on Jefferson City in a few short hours. The mayor cut the ribbon to the new fire station with the hydraulic cutter. The event was filled with community support, civic spirit, smiles, and handshakes.

The Economics of Natural Disasters: Mitigating the Impact

The Economics of Natural Disasters: Mitigating the Impact

At 11:38 p.m., JCFD members and the citizens of Jefferson City were tested to their limits when an EF-3 storm cut a swath of destruction through Cole and Miller counties as well as the heart of Jefferson City. 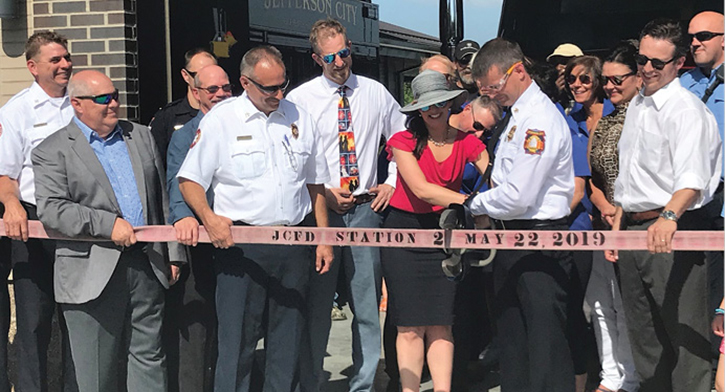 (1) Dignitaries and fire department staff assist Mayor Carrie Tergin of Jefferson City in cutting the “ribbon” on the new fire station No. 2. (Photo by Teresa Clerkin.)

In times of crisis, every fire chief’s best hope is that emergency services personnel rise to the level of their training. The JCFD has invested heavily in structural collapse and technical rescue training, and it paid off in spades. The entire public safety team was exceptional during the initial response phase. Mutual aid was activated, and off-duty personnel were called in to ensure that facilities were staffed and operating with every piece of rolling stock available to meet the high demand for calls for service. The initial deployment of resources was aided by the fortunate reality that many citizens had heeded the warning sirens and taken cover. 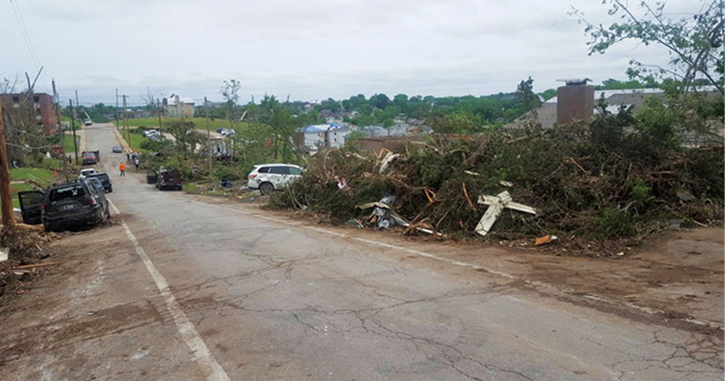 (2) The devastation in Jefferson City after an EF-3 tornado cut through the heart of the city in the shadow of the state capital. (Photo courtesy of Jefferson City Public Works.)

In short order, Missouri Task Force One (MO-TF1), one of 28 national urban search and rescue teams, augmented the local assets. The specialized team falls under the auspices of the Department of Homeland Security and the Federal Emergency Management Agency and was deployed through the State Emergency Management Agency. With all those assets in theater, primary and secondary search and rescue missions were completed in the impacted areas within 18 hours of the time the tornado touched down. Even with an incredible initial response from all disciplines within the city, the incident commander’s assessment during the following operational period indicated that the work was far from over.

As the city/county Emergency Operations Center considered logical next steps in subsequent phases of response, a recurring thought based on past experiences with resource management in an entirely different context kept pushing to the forefront. First, a steady presence equals stability and strength. If fire personnel continue to be embedded in and engaged with those in the community, the visibility of firefighters would provide continued physical and emotional support for citizens. Second, even after the primary and secondary searches are completed, the community is still in crisis. The JCFD’s role must continue. Although the responsibilities are nontraditional and may look different from ”ordinary” 911 calls for service, engaging in community risk reduction within an austere environment fits equally into the mission of the fire service. In this situation, the JCFD could not operate within a reactive “call-and-respond” model. The citizens needed more. They needed a flexible, nimble, and proactive response model to serve them in the operational periods after search and rescue was completed. They needed a visible fire service out there with them. They needed Roving Rapid Response and Recovery (R4) teams. 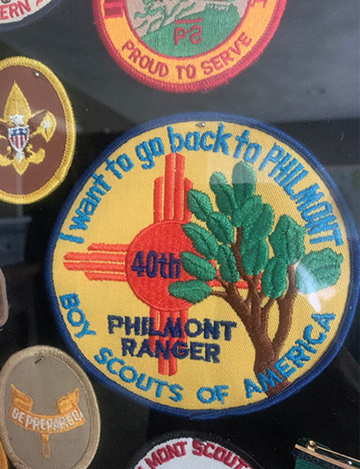 (3) The Philmont Ranger Patch can be obtained only by working a summer season at Philmont Scout Ranch. (Photo by author.)

Origin of the R4 Team

The concept has its roots at Philmont Scout Ranch, the Boy Scouts of America’s premier high-adventure base situated on 215 square miles of rugged New Mexico wilderness. On occasion, the Philmont Ranger Department (backpacking guides/wilderness instructors) would deploy four-person teams of experienced rangers to “rove” a designated portion of the 140,000-acre backcountry. These teams were sometimes sent with a designated task (campsite mitigation, bear cable installation, and trail clearing, for example); at other times, they were deployed to serve more generally as the proactive eyes and ears of the Ranger Department. More often than not, they dedicated time to work in the affective domain (trail ambassadors, search and rescue, and conflict resolution services for crews, for example). The real value added by prepositioning resources in this manner was in the capacity of Roving Ranger teams to spontaneously respond to situations. From both human resource and professional learning perspectives, the benefits included opportunities for rangers to train and execute in situ. 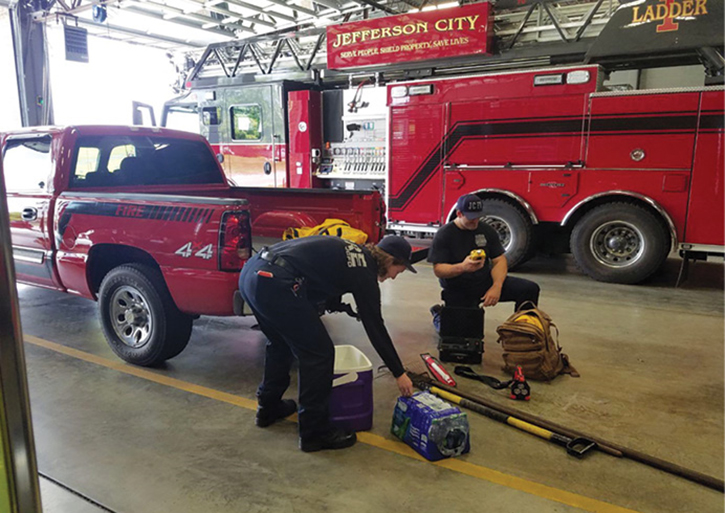 (4) A roving crew is equipping a small vehicle with hand tools and supplies. (Photo by Ryan Carrendar.)

Distributing leadership among a broader group of individuals intentionally develops confidence and competence around autonomous tasking. As a ranger, nothing communicated more trust on the part of department leadership than to have a mission briefing simply state, “Take some tools, go forth, and do good things.” The lesson is timeless and applies equally to civil service: Position the right people in the right place at the right time so they can do good things. In short, train them, equip them, and send them.

To that end, on May 24, 2019, two JCFD SUVs or pickups, chosen for their maneuverability, were deployed with the following load-out:

R4 teams were inserted into the heart of the areas where the tornado had had the greatest impact. In collaboration with volunteers and personnel from other agencies, the teams lent an ear and a helping hand to the survivors. R4 teams reported that they surveyed homes with their instruments; helped with the removal of debris; supported the reclamation of belongings; disseminated information; and, most of all, instilled confidence within the community that “we would get through this together.” 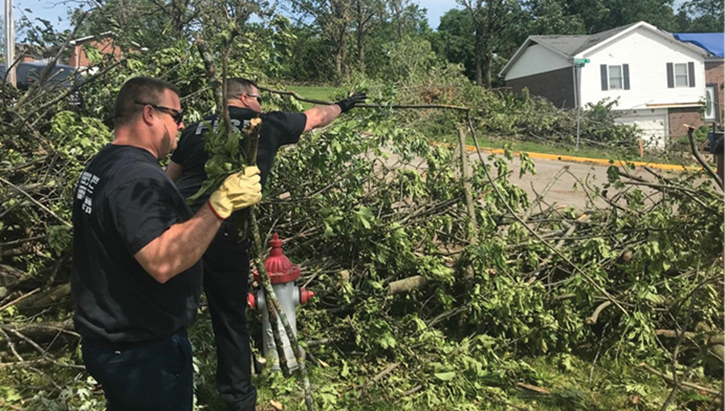 (5) A roving crew clears storm debris from a fire hydrant in a vulnerable area to ensure access to a water supply. (Photo by Jerry Blomberg.) 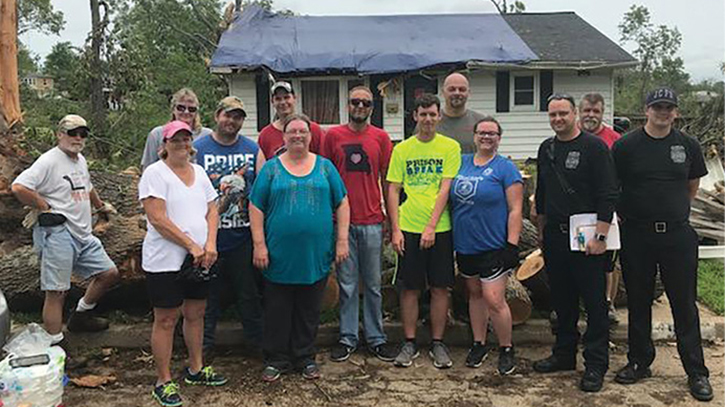 (6) Roving crews take a minute to get a photo with survivors and volunteers during recovery operations. (Photo by Andrew Mallow.) 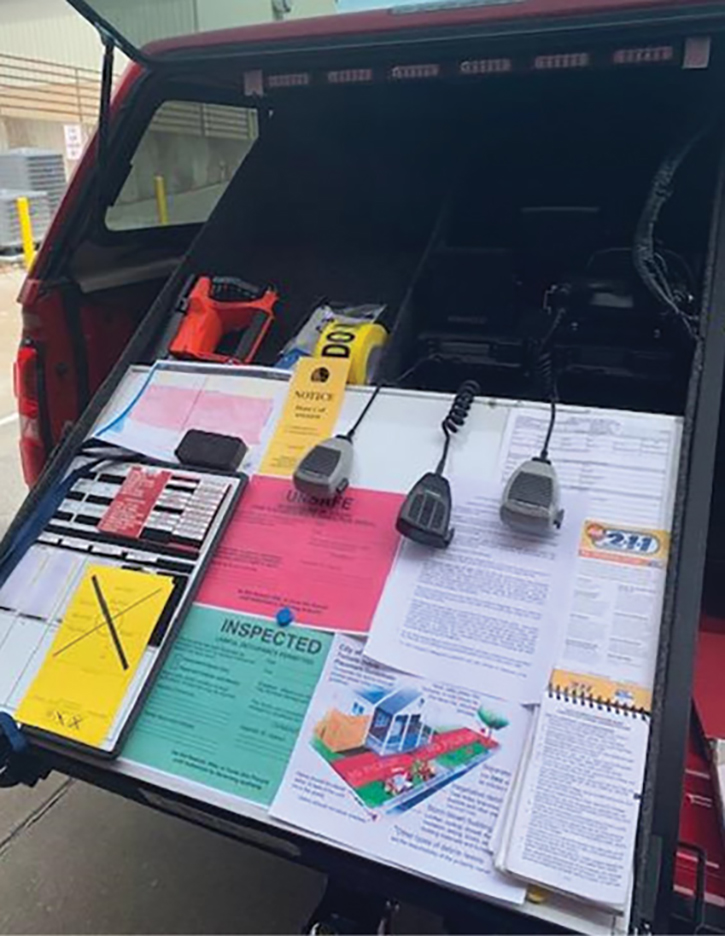 (8) The Division Bravo command post with the most current relief and recovery information. (Photo by author.)

The feedback from firefighters was that frequently the most powerful thing they did was to give a hug when it was needed. The R4 teams were invaluable to the early initiation of the recovery by providing real-time, vetted intel from trained first responders, allowing the city to operate proactively from an informed, strengths-based position. Examples of mission-critical intel gathered by the R4 teams included road accessibility assessments; structural integrity concerns, including buildings that were fully or partially collapsed; electrical service disruptions; gas line exposures/isolations; and fire hydrant accessibility issues, including those covered by debris or out of service. The key to this approach was that the city of Jefferson discovered that by deploying R4 teams, first responders can initiate and accelerate transition to the recovery phase while maintaining proactive response capability.

In an era in which the decisions and actions of emergency services providers and first responders are under constant scrutiny and in occupations in which objectivity and maintaining professional distance are necessarily the norm, the opportunity to serve on a R4 team gave JCFD firefighters the license to make authentic, empathic, and deeply personal connections with members of the community they so proudly serve.

MATTHEW SCHOFIELD, MBA, EFO, has served as the chief in Jefferson City, Missouri, since 2014. He is a 23-year veteran of the fire service and worked as a ranger at Philmont Scout Ranch. He is an Eagle Scout and a certified fire instructor, inspector, and investigator. As a leader for Missouri Task Force 1, he has been deployed on more than 20 federal USAR missions. Schofield has served as an instructor for FEMA, University of Missouri Fire Rescue Training, SPEC Rescue International, and fire brigades in the nuclear industry.

Survivor Found in Coal Mine Accident in Russia’s Siberia