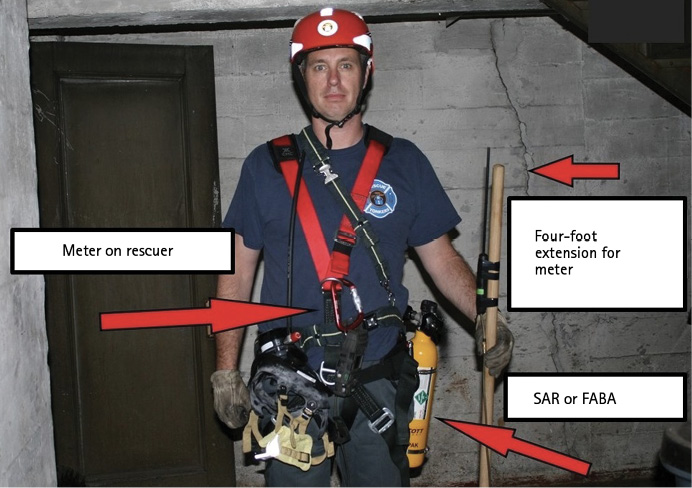 When we receive the call for a confined space rescue (CSR), our brains can go 100 miles per hour on all the things we should be considering. We start to think about the address: Is it commercial, residential, industry, or roadway? Did we notice any work as we went around our district on building inspection? Did we notify the battalion? How many workers were on scene, and what type of work was being done? How will I prepare for this call mentally and physically? And what equipment will I need? Because we are thinking of so many things and situations that could occur, we often overlook some of the most basic steps we need to take to ensure our protection at these incidents.

This article will review some case studies of CSRs that resulted in firefighter, worker, or would-be rescuer deaths. The intent is not to assign blame but rather to change our thinking when responding. There is a common step that is missed in all these case studies that you should be able to identify. Hopefully, we will eventually understand the initial procedure we need to take for these rescue situations.

How to Expedite a Confined Space Rescue

Case study #2: September 2013—Canastota, New York.2 A 58-year-old welder working at the Canastota Wastewater treatment plant went into a methane gas dome to weld a pipe. An explosion occurred while he was welding, which caused his injuries and, ultimately, his death. Another employee who was the “hole watch” sustained burns to his arms and face; he was treated at a local hospital and released the following day.

Case study #3: October 2016—Bel Air, California.3 A 27-year-old laborer was being lowered into a 50-foot drainage shaft in a bucket attached to a mini-crane to clean out mud and debris. The worker was not wearing fall protection. At about 10 feet down, the worker entered an oxygen-deficient atmosphere. He lost consciousness and fell out of the bucket to the bottom of the shaft, where he drowned in one foot of water.

Based on the case studies above, we can see that atmospheric testing was the single most important step missing that, unfortunately, ended in the death of a rescuer, worker, or would-be rescuer. Following are some leading causes of deaths, percentages of fatalities, and most common hazards found in CSRs. This information pertains to permit-required confined spaces (photo 1). You can find all of this information through sources such as the Occupational Safety and Health Administration (OSHA), the National Institute for Occupational Safety and Health (NIOSH), and the Centers for Disease Control and Prevention.

The leading cause of death in confined spaces is asphyxiation. These deaths have resulted from either an oxygen deficient atmosphere or exposure to a toxic atmosphere. The most common toxins found in confined spaces are H2S and CO—two very common gases that can be detected by most atmospheric monitors.

Of the fatalities that occur at these emergencies, 60 percent involve would-be rescuers. When there are multiple deaths in a confined space scenario, it will usually involve some number of would-be rescuers and some actual rescue personnel.

In August 2018, NIOSH reported the following findings regarding 670 confined space incidents that resulted in a death:

These findings are quite eye-opening; a vast majority, if not all, can be prevented if we just do one thing: know the atmosphere!

Now that we know atmosphere is one of the main causes of death in confined spaces, we need a game plan on how to overcome this problem. The plan is very simple; you need only a direct reading monitor, sufficient sampling tubing, and a broom or mop handle.

When you approach the hole or confined space, the first thing you must do is assign one of your personnel with a direct reading monitor and documentation to start testing the atmosphere. Begin testing outside the confined space to get a baseline reading and see if any contaminants are present outside of the space. Knowing and understanding the vapor density of the suspected contaminants will be critical in working in and around and monitoring the confined space.

After you have monitored and documented the outside space, monitor the confined space itself. Attach the sampling tubing onto the monitor so you can monitor all levels of the space. Once you begin to monitor, go from the top of the space down to the bottom. Depending on how deep the space is, consciously divide the space into three separate zones: top, mid-level, and bottom (photo 2). Start monitoring from the top zone down to the bottom, but do not rush through any zone.

Also, know the response or “lag” time of your meters. Instrument response times depend on your meter and what contaminants you are measuring. When using sampling tube, add one to two seconds of lag time for each foot of hose deployed.

We never want to enter a flammable atmosphere in confined space. Our oxygen level should be between 23.5 and 19.5; the LEL should be below 10 percent. Since we have monitored all three levels of the space, we should get an accurate reading of the atmosphere. However, we might not have the whole picture until we get to the bottom of the space. When in doubt, wear flame-resistant/retardant clothing into the space.

Once you have tested the confined space, your rescuer is now ready to enter the space (photo 3). Remember, just because you have tested the atmosphere and the meter does not detect any contaminants doesn’t mean you should not wear some type of fresh air-supplied breathing apparatus. As your rescuer enters the space, he will also be equipped with an atmospheric monitor; only this time, sampling tubing or a “wand” will be attached to a broomstick approximately four feet away from him, and the monitor will be attached to his harness. (photo 4).

OSHA recommends that the entrant monitor the atmosphere four feet ahead of the descent and to either side. Also remember how much time it takes to sample, identify, and read the atmosphere with your monitor. Do not descend too fast; you could potentially go right through a toxic atmosphere and not know it. As you lower the rescuer into the confined space, relay monitor readings to the attendant or “hole watch” so you can document the readings.

Once at the bottom of the space, the rescuer will continue to monitor the space throughout the packaging and removal of the patient (photo 5); this will ensure that all personnel inside the space are safe while performing the functions that will hopefully save the victim’s life.

There is much more involved in CSR, including ventilation, assignments, training, rigging, and patient packaging. This article looked at just one aspect of this scenario. Hopefully, it will change your mind on how important atmospheric monitoring is to confined space incidents. Follow your standard operating procedures or develop new ones for CSR, but do not forget atmospheric monitoring. It just may save your life.

MIKE GIROUX is a 19-year veteran of and a lieutenant with the Yonkers (NY) Fire Department, where he teaches all aspects of technical rescue. Giroux is also a nationally certified fire instructor I and fire officer and a senior chief instructor for Wright Rescue Solutions, Inc., based in Panama City, Florida.