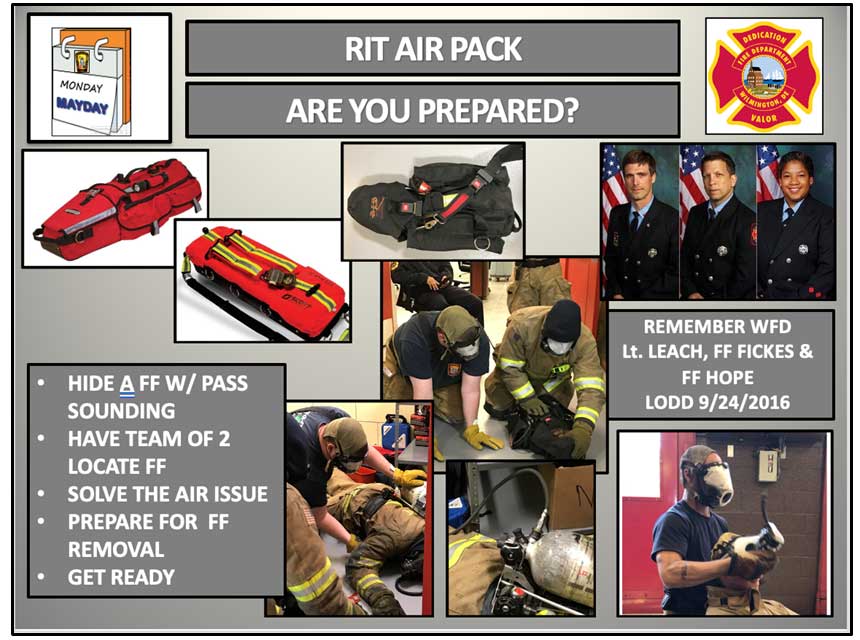 This month we remember three firefighters from the Wilmington (DE) Fire Department who died in the line of duty. On September 24, 2016, Wilmington firefighters responded to a fire in a row house. The set fire took the lives of Lieutenant Christopher Leach and Firefighters Ardy Hope and Jerry Fickes. The basement fire caused a collapse of the floor and trapped several members.

Here is a quote from the NIOSH report:

Note: Engine 5B was found without her helmet, SCBA facepiece, and protective hood. The off-duty fire fighter noticed that Engine 5B was pinned under a refrigerator that had fallen from the 1st floor.

Fortunately, the firefighter who found the trapped member was able to extricate her from the debris. But, if the rescue required extended time, there would have been a need to utilize a RIT self-contained breathing apparatus (SCBA) to provide her with breathing air. Are you ready for this scenario?

This month’s Mayday Monday skill/drill is to practice deploying the RIT SCBA. This tool provides us with several options to solve a downed firefighter’s air problem. The techniques include:

Please practice these procedures. It is a rare instance that this equipment is needed, but if it is required, a firefighter is in a life-or-death situation. We must be highly proficient in the use of this tool.

Thanks for taking time to view this month’s Mayday Monday Firefighter Survival Campaign post. Please send pictures of you and your crew performing this month’s skill/drill. Send them to mayday.monday@dc.gov. See you next month.