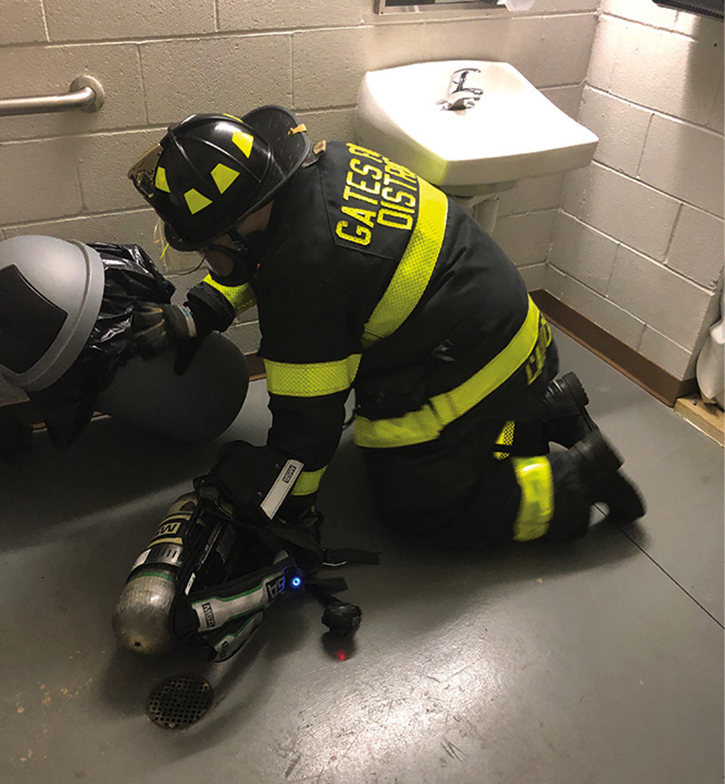 By Louis A. Comenale III

Wearing gear properly is one way for firefighters to decrease their chances of injury during firefighting operations. Being able to don your personal protective equipment (PPE) quickly and properly gives the civilians we are sworn to protect the best chance for rescue.

According to the national standard, firefighters should be able to don structural boots, pants, coat, gloves, hood, and helmet in one minute. Donning a self-contained breathing apparatus (SCBA), face piece, and breathing air from the SCBA requires an additional minute—for a total of two minutes. Besides quickly turning out for a response, donning your gear proficiently is one of the proven ways to save time on the fireground. You can put on only so much gear before entering the apparatus: boots, pants, hood, radio, and coat. While responding, if your department’s standard operating guidelines (SOGs) allow you to, you can and should don more gear—gloves, SCBA, and flashlight—and finish closing your coat. Once off the rig, you can don the helmet and face piece at the appropriate location and without removing your gloves.

Firefighters should practice a method of donning PPE without setting the PPE down on the ground. Inevitably, the gear will either be kicked down a stairwell, lost in snow, or possibly forgotten, which now makes the members unable to perform their function. I am a firm believer that gloves should be put on in the apparatus en route and not removed until rehab. I do not believe in glove straps affixed to a turnout coat; they can and will catch and entangle a firefighter. When you step off the rig with your gloves on, you are ready to go to work. Some departments teach and prefer that gloves be donned last in the sequence. Depending on the specific gear your department uses, this might be the favored method.

Is There Any Benefit to the Traditional Timed Donning Drill?

Drill of the Week: PPE Donning

You should not put on your SCBA mask in the apparatus en route to the alarm. Firefighters stretching lines, throwing ladders, and making hydrants with their masks on create a fire scene safety issue. The SCBA mask inhibits the wearer’s vision, which can lead to trips, falls, and loss of situational awareness. The SCBA mask also fogs up if worn without the mask-mounted regulator attached and flowing air. Injuries caused by obstructed vision are avoidable, and injuries that occur on the fireground impede fireground efficiency.

Beside the standardized evaluations done with a stopwatch, how do we make our firefighters proficient in donning gear and ready to do combat on the fireground? Standardized donning drills have their place in the fire service, mainly for academy recruit classes and yearly competency evaluations. Done over and over, these drills lose their value, and firefighters will lose interest eventually. Here are a few PPE drills to conduct on a rainy day, when it is too hot to train outside, or when coming back from a run.

The closet drill is very simple. Take the firefighter’s SCBA and face piece and do a “blow out” of the SCBA, which entails unscrewing the high-pressure hose from the bottle, tightening and entangling the waist and shoulder straps, loosening the bottle retention strap, opening the purge valve, and doing everything possible that requires the firefighter to troubleshoot (photo 1). Then, put the SCBA in a darkened closet, turn on the personal alert safety system (PASS) alarm, and send the firefighter into the darkened space or equip him to simulate zero visibility (photo 2).

(1) A “blown out” SCBA with straps tangled, bottle disconnected, and bypass open. (Photos by author.)

(2) A firefighter with full PPE in zero visibility.

In addition to introducing audible and visual stress as there would be on a fireground, this drill makes the firefighter manipulate an SCBA and all its components with gloved hands. Working with gloved hands builds the wearer’s confidence in doing so and develops the member’s critical thinking. Troubleshooting and reassembling an SCBA in a dark small closet with a loud PASS alarm teaches the firefighter to think critically in a high-stress but controlled environment.

(3) The firefighter works to fix all problems so he can don the SCBA and breathe air.

This is a repetition and muscle memory development drill. There are many doors in and out of the firehouse. Working as a company or as individuals, members start at the exterior door of the firehouse and approach the door as they would enter an immediately dangerous to life or health (IDLH) atmosphere. If drilling as a company, the firefighters rehearse how their company dons gear at the threshold and in what order the company members will enter.

If drilling individually, members can practice using gloved hands to manipulate face piece straps, the protective hood, the helmet, and the mask-mounted regulator (MMR). After fully donning gear, the firefighter enters the door and doffs his MMR, helmet, protective hood, and SCBA face piece. He moves to the next door and repeats the evolution. The firefighter will repeat the drill over and over until he runs out of doors at the firehouse. Drilling as a company is a rehearsal, so during the drill, the company officer can adjust how he wants the company to enter an IDLH atmosphere, observe inefficiencies, and make adjustments to optimize the company’s performance. If used as an individual drill, this will serve to train in building muscle memory and developing synchronized muscle movements for the firefighter to efficiently don gear.

After conducting this a couple of times, you can use this drill to create a friendly, in-house competition. Time each firefighter; the one who dons his face piece, protective hood, helmet, and MMR in the least time can earn bragging rights or a small reward.

Returning from an Alarm

I use this drill any time I see a company member on an alarm who demonstrates the need for immediate corrective action. For example, if a firefighter’s SCBA waist straps are undone or not buckled and tightened, that must be corrected immediately. If I do not catch the violation before the member enters a structure, I pull the member aside after the alarm and explain the importance of wearing gear properly.

If conducting a drill after returning from the alarm, instruct your members not to doff their gear. After backing into the bay or onto the apron, instruct the members except the driver/operator, on a signal, to turn on their PASS devices. Once the alarms have been activated, all members will dismount the apparatus and don their SCBA face pieces with gloves, ensuring that all gear is donned according to SOGs and the manufacturer’s recommendations. Once each member completes donning his gear, he can deactivate his PASS device. The drill will conclude once all PASS devices have been deactivated. It is important that the company officer participate in this drill to demonstrate that it is not a disciplinary but a corrective measure intended to better the entire company. It is also a reminder to all members to wear all PPE properly, no matter how benign the member thinks the alarm might be.

Many times, ground ladder drills are conducted in accordance with a skill sheet approved by the authority having jurisdiction (AHJ), taken from a Firefighter I curriculum or developed in house. These drills can be seen all over social media, with firefighters deploying ground ladders while wearing at a minimum bunker pants, helmet, and gloves. If your company could be in a situation requiring the use of the vent-enter-search (VES) or vent-enter-isolate-search (VEIS) tactic, a good drill for rehearsing these tactics is to combine deploying ground ladders with donning gear. Instead of starting the drill with the ladder lying on the ground so many feet from the building (as prescribed in the skill sheet), conduct a drill of people reported to be trapped on the second floor with the ladders in the ladder rack.

Starting with members in the rig with as much gear donned as appropriate, the members dismount the apparatus and choose and deploy the appropriate ladder for the targeted drill tower window or a window drawn with chalk on the side of the firehouse. Once the ground ladder is deployed, members now can don their face pieces, protective hoods, helmets, and MMRs and then climb the ladder and simulate venting the window. This drill emphasizes the importance of firefighters having gloves donned once they step off the apparatus. Time is of the essence when it comes to saving civilian lives from an IDLH atmosphere. Donning your face piece without gloves might be quick on the drill ground, but in a stressful rescue situation, firefighters could and will fumble with, misplace, or forget their gloves. If, in the firefighter’s haste, the window is broken while deploying the ground ladder, glass shards raining down on the firefighter could injure an unprotected hand. Perform ground ladder deployment for VES/VEIS with fully donned PPE except for a face piece. This is a sure way to avoid injuries on the fireground.

It has been proven over and over regarding saving civilian life that time can be “gained” only by turning out quickly on dispatch and being fast and efficient on the fireground after donning PPE. Donning PPE effectively is proven to be an effective way to give the civilians you serve the best chance for survival and to protect yourself from the dangers of the fireground.

Louis A. Comenale III is the lieutenant/municipal training officer for the Gates (NY) Fire District, where he has served for 13 years, the past four years as a lieutenant. He is a third-generation firefighter. He is a New York State fire instructor and a nationally certified fire instructor II. Comenale has an associate degree in fire protection technology.