Mitigation of fire fuels in ­wildland urban interface (WUI) areas is a major effort occurring in western communities to build fire safe spaces around dwellings and outbuildings and to minimize the possibility of wildfires laddering up into crown fires. A fire department and community in Colorado are using an unusual method of mitigation on the landscape infrastructure to help reduce the fuel loads, and it’s something most people might not have thought of—goats. 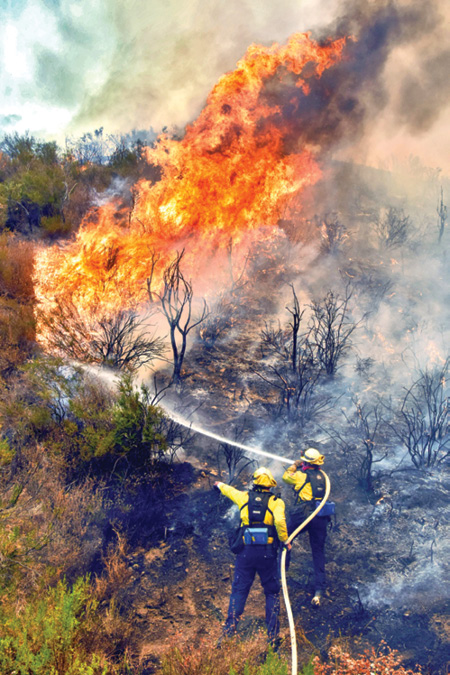 Einar Jensen, risk reduction specialist for South Metro (CO) Fire Rescue in Centennial, Colorado, says 2017 was the third year of an effort on the part of three homeowner associations (HOAs) and the fire department that had 300 goats helping create a fire-adapted landscape around homes in the WUI. “The goats treated 15 acres in Pine Ridge, which is the third year it has been gone over by the goats,” Jensen says, “as well as six acres of the Estates of Buffalo Ridge and an additional six acres in The Retreat neighborhood, all of which are in the city of Castle Pines. We had 301 goats working, including one kid that was born during the mitigation event.”

Jensen says the goats eliminated most of the noxious weeds and ladder fuels from around stands of Gambel oak. “By using the goats, they eliminated the leaves on the lower two-thirds of the oaks, so the oaks spent the rest of the growing season replacing the leaves instead of expanding their root systems,” Jensen points out. “Forcing the oaks to use their reserves to produce leaves instead of roots means there was less canopy above and less expansion of the oaks.”

If the oaks were not expanding, that meant there were more natural fuel breaks between different oak groves and other trees. “With those natural fuel breaks created by the goats, the fire would drop down to the surface where firefighters can fight it,” Jensen observes, “but if it gets up into the canopy, they would have to pull back.”

He notes that the fire department and HOAs wanted to manage the oaks so if a wildland fire did come through that area, small chunks of oaks and grasses would burn but the ponderosa pines and homes in the area would remain untouched. “The goats are increasing the diversity of the landscape and improving the soil quality and increasing soil moisture content, so it’s a win all around,” Jensen says. 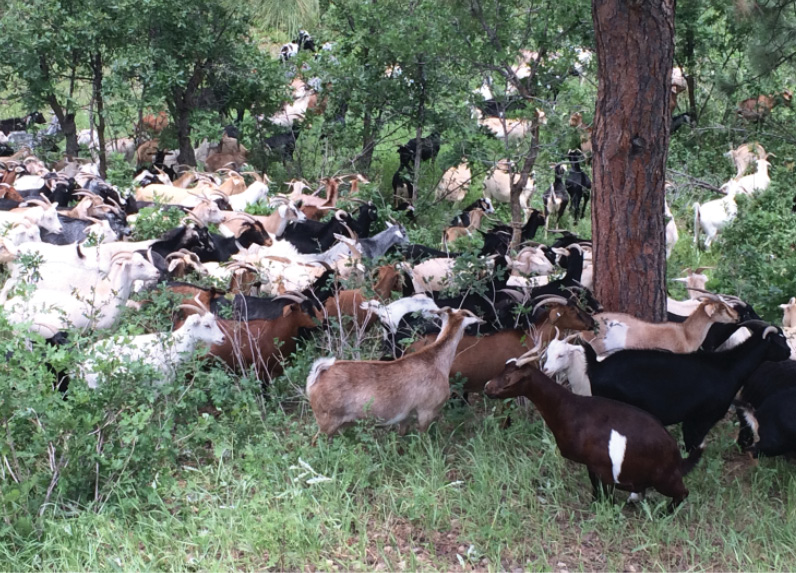 (1) A herd of 300 goats is being used by South Metro (CO) Fire Rescue and the city of Castle Pines to mitigate landscape infrastructure around three neighborhoods. (Photos 1-6 courtesy of South Metro Fire Rescue.)

The Pine Ridge Homeowners Association was the first location where the goats were used in 2015 as part of a Ready, Set, Go! Outreach Grant, when Goat Green of Cheyenne, Wyoming, brought in 300 Angora goats to treat seven acres of open space. The following year, the goats returned to Pine Ridge and retreated the initial seven acres, followed by an additional seven acres. The goats performed the mitigation work over 13 days in sections measuring one to two acres. In 2017, two HOA areas were treated for the first time and the third HOA was retreated for the third time by the animals. 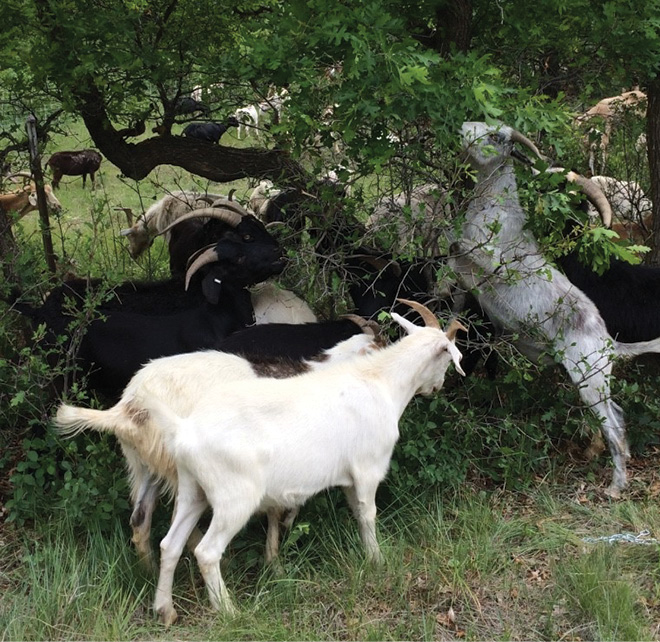 (2) The goats eliminate most of the noxious weeds and ladder fuels, including the lower leaves of Gambel oak, forcing the oaks to regenerate leaves instead of expand their root systems.

Jensen says the goats prefer leaves and the newer stems on the oaks as well as eating grasses and noxious weeds. “A goat’s stomach has an enzyme in it to handle the noxious weeds that other animals can’t,” he points out. “This place is a smorgasbord for the goats, and they leave the ponderosa pines alone.” The only supervision required for the goats was a pair of wranglers and one border collie.

The goats cost the groups approximately $1,000 a day, plus a $2,000 startup fee and the cost of mileage, Jensen says. “Each HOA pledged most of the money for the goat mitigation, and we received some community assistance from the city of Castle Pines and from Allstate Insurance,” he adds. “South Metro Fire Rescue contributes my time for education, marketing, and working with the media, and we also paid the mileage for the 2017 project.”

A local high school, Rock Canyon High School, Jensen says, performed a baseline survey of the areas that were mitigated in 2017 and will do a follow-up survey after mitigation efforts. “The students will document scientifically how the goats are building a more diverse and fire-resistant landscape,” he points out.

Jensen says the goats were at work for four weeks during 2017. “To get the most benefit from goat mitigation, they should treat an area five years in a row and then come back every three to five years. Unlike mechanical treatments, the goats had no impact on surface or ground water or on the insect populations. The goats had minimal impact on the soil and in fact fertilized it with their urine and feces,” Jensen says. “They also produced minimal noise, munching and braying instead of the sound of diesel engines; and minimal air pollution, methane from digestion vs. diesel smoke.”

The greatest benefit of the goat mitigation project, according to Jensen, has been increasing the social acceptance for wildfire mitigation. “As studies have shown, a majority of WUI residents understand the potential risk for wildfires, but a combination of psychological factors including the pervasive ‘It won’t happen to me’ theory and misunderstandings about mitigation make them reluctant to act,” Jensen observes. 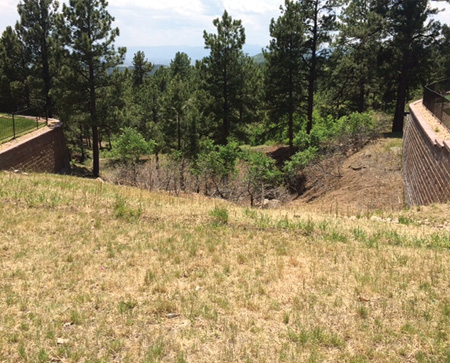 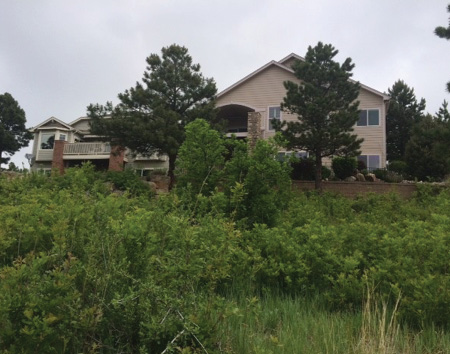 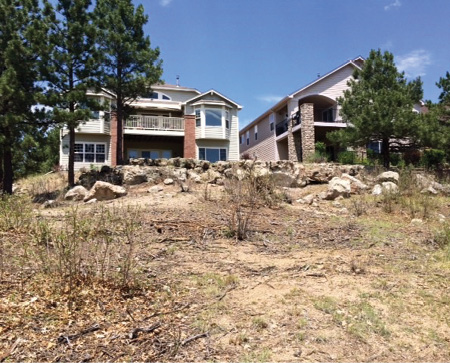 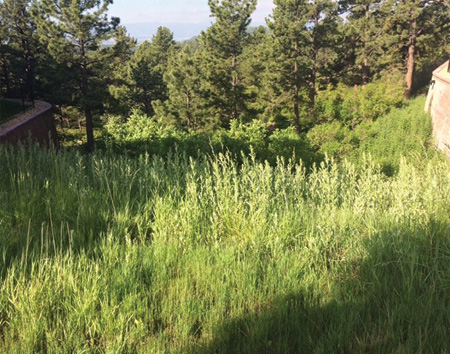 (3) Neighborhood homes were surrounded by brush, weeds, and ladder fuels in this “Before” photo. (4) This “After” photo shows the same neighborhood landscape after it had been eaten over by the goats. (5) The weeds and brush ran up to the retaining walls of homes in this Colorado neighborhood before being treated by the goats. (6) Once the herd of goats finished with the same area, fire safe spaces that were defensible appeared.

Jensen, South Metro Fire Rescue, and the HOAs believe the goat mitigation has been successful and hope to continue with the program in coming years. “The overall feeling in the fire department and the community is that the mitigation is positive, and it has thus far exceeded my expectations,” Jensen notes. “That positive feeling was not the case in the community when we promoted mechanical mitigation or the use of hand saws and chain saws. But the public really got onboard when it involved the goats.”

ALAN M. PETRILLO is a Tucson, Arizona-based journalist; the author of three novels and five nonfiction books; and a member of the Fire Apparatus & Emergency Equipment editorial advisory board. He served 22 years with Verdoy (NY) Fire Department, including in the position of chief.

Mitigating the Dangers of Wildfire