In the early summer of 2020, wildfires ravaged California, sending smoke plumes high into the air, visible from space. When the smoke mixed with the Pacific Ocean’s coastal fog, San Francisco’s daylight darkened into a strange amber-sky “Martian winter” in which headlights and streetlights remained on. Parts of California had the worst air quality in the world from the wafting smoke during those wildfires’ intense burning days until the Pacific Coast winds shifted and blew the smoke to other parts of the state.

Two wildfire science vehicles, one equipped with radar (photo 1) and one with light detection and ranging (LiDAR) (photo 2) from San Jose State University (SJSU), are studying wildfires to better understand their behavior, science, dynamics, and effects on the atmosphere. The vehicles are part of the university’s Wildfire Interdisciplinary Research Center (WIRC) and the Fire Weather Research Laboratory (FWRL).1-2 The WIRC has sampled more than 40 wildfires since 2013. SJSU Professor Craig Clements directs both entities and provided the information below.

The WIRC teams are requested to incidents through the Resource Ordering and Status System (ROSS), which also requests firefighter response. The team scientists are listed in ROSS and have a Firefighter II classification, the only meteorology team so qualified in the United States. The goal is to get the trucks listed in ROSS, not just the individual team members. The vehicles are not considered first responder emergency vehicles but science vehicles with California exempt plates. Each team member is red-carded with an arduous pack test (completing a three-mile hike while carrying a 45-pound pack in under 45 minutes) through a memorandum of understanding with the Tahoe National Forest. They would prefer to have the trucks listed in the ROSS vs. the Firefighter II classification so that they could charge for responding to incidents. Currently, they are funded by grants. 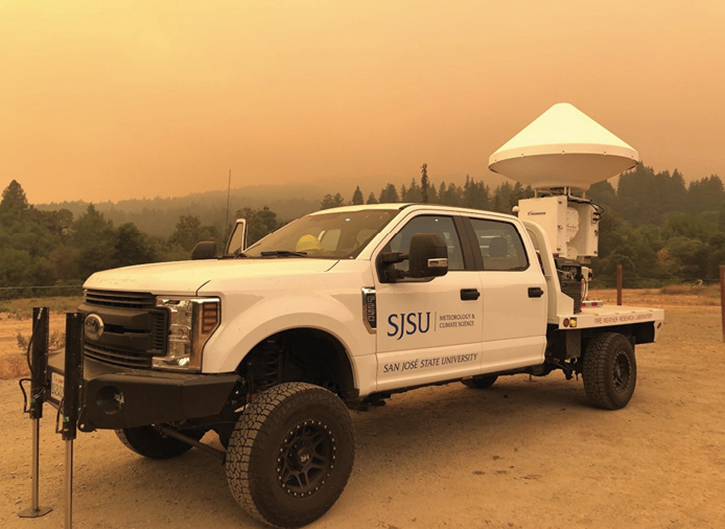 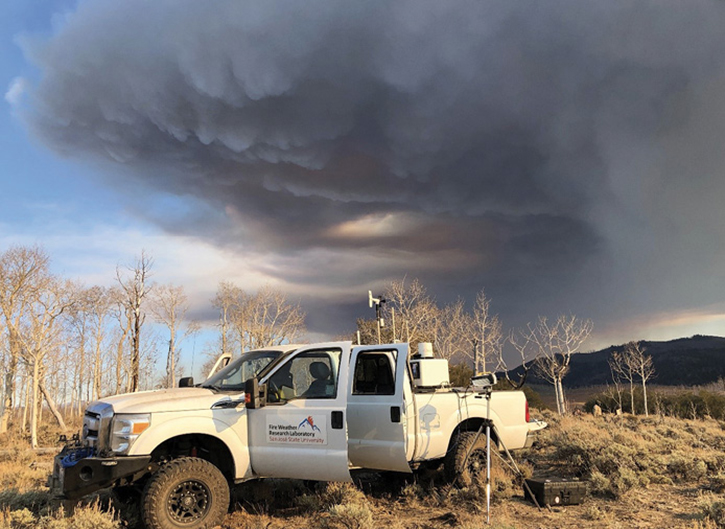 Normally, Clements says, two to three people ride per vehicle when they are deployed, but now with Covid-19, two people are the maximum. The WIRC deployed to only two wildfires in 2020. Some California wildfires were deemed too dangerous to drive to and study, such as the 2020 Creek Fire.

On deployment, they contact the incident meteorologist (IMET) and the fire behavior analysts (FBAs) and meet with them at the incident command post (ICP) to discuss their deployment. Their radios are cloned there before they head out to the fire; they keep away from areas where structure protection activities are occurring and keep one to two kilometers from the fire line, usually on a flank or somewhere very safe downwind.

The teams deploy, set up, and level the trucks and start scanning the smoke plume with the radar, making vertical wind profiles with the LiDAR and preparing a weather balloon to launch once they receive permission from air operations or the ICP. The WIRC crews typically deploy for 24 hours but sometimes for 48 hours, camping or sleeping at or in the trucks. Generators power both the LiDAR and the radar truck’s equipment.

The radar and LiDAR bounce the instruments’ transmitted energy off particles. Although the remote sensing instruments are tuned for atmospheric conditions, they can detect objects, too. Since they are Doppler systems, they determine particles’ velocity, which can be translated into wind speed. The radar’s dual-polarization enables them to determine the particle type in the smoke plumes. The LiDAR measures the smallest smoke particles; the radar measures the larger debris, or pyrometeors. Both the LiDAR and radar can detect fire whirls before firefighters on the ground see or observe them. 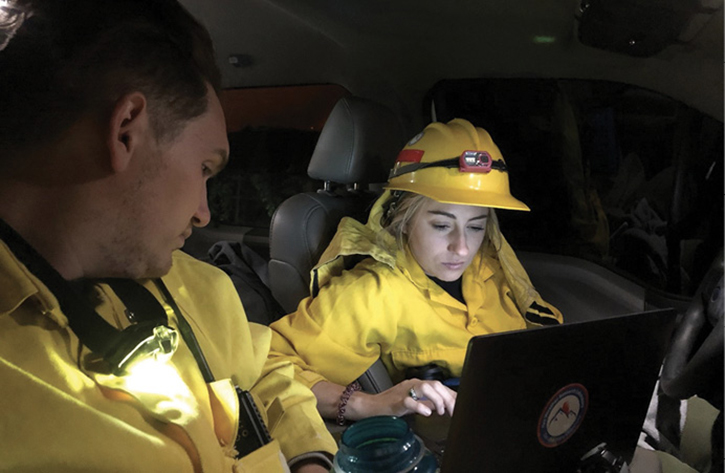 The collected radar and LiDAR data are stored locally and the plots are tweeted or texted to the IMET (photo 3). Data are downloaded once back at SJSU and analyzed for use in research articles and publications. For 2021, the goal is to feed the data in real time to SJSU’s Fire Behavior Forecasting and Fire Weather Prediction System (WRF-SFIRE), a national weather prediction model that is linked to fire behavior. With WRF-SFIRE now online, these data will be used to improve the forecasts in real-time. Although a drone is available for researchers to use, they aren’t allowed on active wildfire incidents yet.

At the Detwiler Fire, the WIRC team provided upper-air sounding data to the IMET and FBAs. The airspace had to be cleared so they could get the weather balloon up. Those data were helpful to the incident in understanding the smoke’s impact on aviation and to determine when the inversion would lift.3

Clements says wildfires are not easy to sample or study. Doing field-based wildfire research is the most difficult way to study wildfires vs. downloading climate data to show trends. Without these measurements, researchers really don’t have a way of truly understanding how wildfires create their own weather. Clements said, “It’s crazy that wildfires don’t get the attention from the meteorological community as hurricanes or tornadoes receive. ‘Fire Weather’ is California’s severe weather, and it’s only getting worse as climate predictions have shown.”

WIRC’s research into fire weather and behavior, smoke plume dynamics, and fuel conditions is funded by the National Science Foundation, the National Aeronautics and Space Administration, the National Institute of Standards and Technology, and the USDA U.S. Forestry Service, among others.

The LiDAR vehicle is a crew cab pickup equipped for off-road travel with an air bag-supported raised suspension. It features a front bumper winch, a built-in air compressor to inflate the air bags for the LiDAR frame and rear suspension, five-inch off-road lights, and a custom tool mount securing a shovel and a McLeod tool. The removable LiDAR box is mounted to a frame that is separated from the lower frame by air bags to reduce shock and road vibration. The SJSU machine shop custom-fabricated the frame.

A dual-battery system powers the truck’s technical equipment. The cab has laptops mounts and one for a tablet computer, dashboard switches to operate the weather station datalogger, the 4G Internet, the weather balloon sounding system, and LED bed lights. A weather station includes an anemometer on an extendable mast, a temperature/relative humidity sensor, GPS, a barometric pressure sensor, and a compass for calculating wind direction. The LiDAR truck also tows the trailer carrying the 8,500-pound, 106-foot meteorological tower.

The truck that deploys the Doppler cloud radar is a four-wheel-drive flatbed pickup with a crew cab and equipped for off-road travel with off-road tires and a raised suspension. The vehicle features a custom front bumper with five-inch lights (but no winch) and rear lights for the work area and bed. The eight-foot flatbed is reinforced with one-inch steel plating to support the radar, which is powered by a generator. The leveling system has four jacks, each with a 12,000-pound lift capacity and 24 inches of throw; it levels the truck in three minutes for fast deployment. A truck box is mounted underneath for tools; one on the bed holds supplies, leveling blocks, extra fire shelters, and water. A 3.5-gallon gasoline container is also mounted next to the generator.

Author’s Note: Professor Craig Clements thanks John “Jr.” Gorvad and the SJSU Autoshop, the College of Science Machine Shop, SWAT Customs, and 4-Wheel Parts for their contributions adapting and maintaining the LiDAR and radar vehicles.

Peter Ong is a contributor to Fire Apparatus & Emergency Equipment and Fire Engineering.