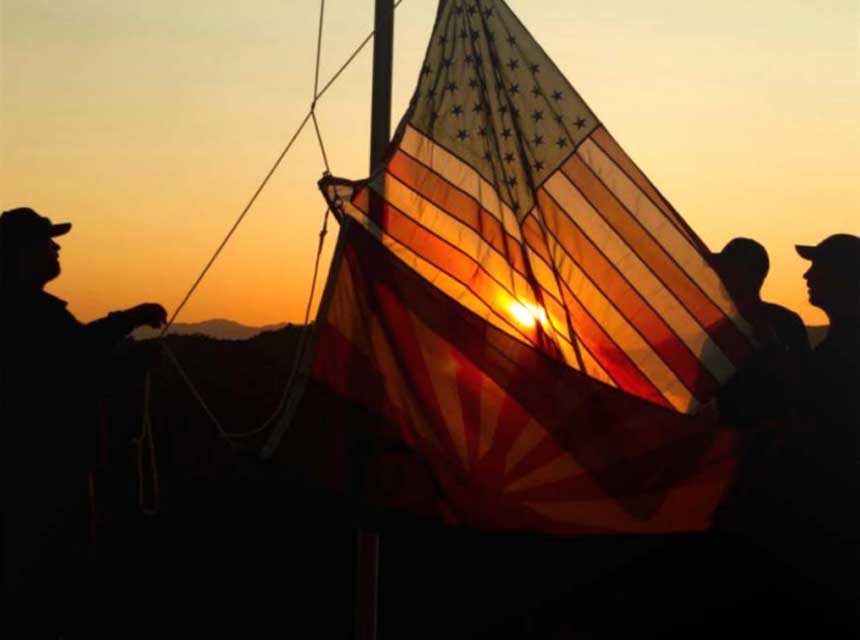 On June 30, 2013, 19 firefighters with the Granite Mountain Interagency Hotshot Crew (IHC) were killed battling the Yarnell Hill Fire in central Arizona. One member survived the incident.

Podcast: Sons of the Flag: Finding Purpose in Tragedy

The names of the members who fell that day:

Brendan McDonough was the lone survivor of the tragedy.

From the executive summary of a report released on the fire (Yarnell Hill Fire: Serious Accident Investigation Report), June 28, the Yarnell Hill Fire started high on a ridge west of Yarnell, Arizona when lightning ignited multiple fires. The fire, which was under the jurisdiction of the Arizona State Forestry Division, started in a boulder field in steep terrain with no vehicle access; it was about one-half acre in size. Responders saw minimal fire activity or spread potential, and they had several safety concerns with putting firefighters on the hill overnight. In consideration of these and other factors, the Incident Commander prepared for full suppression on the following morning.

On June 29, resources held the fire in check until around 1600, when winds increased and the fire spotted outside containment lines. That evening, the Type 4 Incident Commander ordered a Type 2 Incident Management Team (IMT) and additional resources for the next morning. The fire grew throughout the night, to an estimated 300 to 500 acres by morning.

Early on June 30, members of the Type 2 IMT began arriving. In a briefing at 0700, the incoming Granite Mountain IHC Superintendent accepted the role of Division Alpha Supervisor. His assignment was to establish an anchor point at the heel of the fire with the Granite Mountain IHC. The Type 2 IMT assumed command, an action formally announced by radio at 1022.

For most of the day, the fire spread to the northeast, threatening structures in Model Creek and Peeples Valley. Around 1550, the wind shifted and the fire started pushing aggressively to the southeast, toward Yarnell. Fire resources shifted to resident evacuation and structure protection in town. Only the Granite Mountain IHC remained out on the ridge, on the southwest perimeter of the fire. Personnel who communicated with the Granite Mountain IHC knew the crew was inthe black at that time and assumed they would stay there. No one realized that the crew left the black and headed southeast, sometime after 1604. At 1630, thunderstorm outflows reached the southern perimeter of the fire. Winds increased substantially; the fire turned south and overran the Granite Mountain IHC at about 1642.

There is a gap of over 30 minutes in the information available for the Granite Mountain IHC. From 1604 until 1637, the Team cannot verify communications from the crew, and we have almost no direct information for them. There is much that cannot be known about the crew’s decisions and actions prior to their entrapment and fire shelter deployment at around 1642.

It is known that the Granite Mountain IHC left the black sometime after 1604 and traveled through an unburned area toward a safety zone at the Boulder Springs Ranch. Thunderstorm outflows changed the intensity and direction of fire spread, and the rapidly advancing fire eliminated the crew’s options of reaching the safety zone or returning to the canyon rim. They had less than two minutes to improve a deployment site. They were deploying fire shelters when the fire overtook them. Temperatures exceeded 2000°F, and the deployment site was not survivable. The nineteen crewmembers were found approximately one mile south-southeast of their last known location, approximately 600 yards west of the Ranch.

IN Man Drowns While Rescuing Woman in Lake Michigan