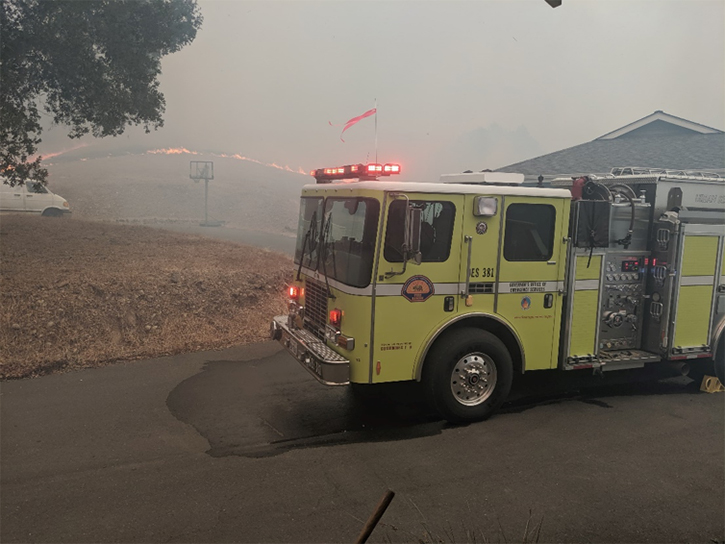 The uses of Type I engines have evolved over the years. Initially, they were used almost exclusively for structural firefighting and protection in the wildland fire arena. However, with larger campaign wildfires, more structures being built in the wildland urban interface (WUI), and resource drawdowns becoming more common, they are being requested more often. The National Wildfire Coordinating Group (NWCG) types of resources are based on a set of minimum capabilities. For example, some minimum features of a Type I engine are a 300-gallon tank capacity, a 1,000-gallon-per-minute pump rate, a master stream, four personnel, and so on.1 The NWCG also refers to Type I and Type II engines as structure engines. Traditionally, this is true; however, depending on the equipment complement and number of personnel, these engines can perform multiple roles.

(1) A Type I engine prepares to defend structures as the fire front approaches. (Photos by Brian Lucero.) 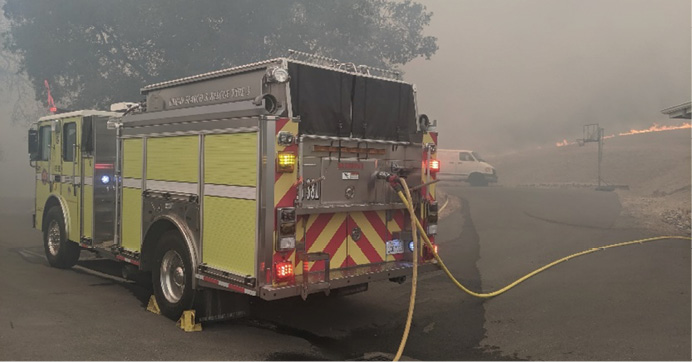 (2) A Type I engine prepares to protect multiple structures as the fire front approaches.

PREPARING FOR YOUR NEXT URBAN INTERFACE FIRE

Firefighting in the I-Zone: Making it “Safe to Stay”

Structural Firefighting: Lessons Learned from the World of Wildland

Along with more frequent and larger fires, we are experiencing a larger WUI. One of the main reasons for this is that more people are building homes in wildland areas and in growing cities and towns. This urban sprawl significantly increases the number of houses exposed to wildland fires and the resources needed to protect them.

Because of their larger pumps, size, type of hose complement, and tank capacities, Type I engines are usually used for structure protection.

They are best suited for maintained roadways that do not have access issues because of their larger size. If fire has spread to structures, they are best suited for structural firefighting whereas smaller Type III-VI engines are suited and designed more for wildland firefighting. This may include bumping from house to house as a fire front passes through and mop-up and patrol afterward.

Other Duties as Assigned

Some Type I engines carry specialized equipment such as heavy rescue gear and advanced life support medical equipment. They may also be assigned to locations such as helibases and airbases as fire suppression support because of their large water tank, pump, and foam capabilities. With the increase of fires, resources become drawn down, which creates the need for incident commanders (ICs) to use what they have to accomplish their strategic goals and tactical objectives. With the Type I engine come four personnel. In a strike team configuration, that is 20 personnel not including the Strike Team leader. So, at times, ICs have been using the personnel in a hand crew configuration. Even if the apparatus itself can’t be used for whatever reasons, the personnel and equipment can still be used.

Type I engines generally do not have pump-and-roll capabilities. So, they do not perform as well as other engines for tactics such as a mobile fire attack. However, they can be used as a stationary pumping engine for hoselays or even in water-shuttle operations, if needed. They are also larger and require better access and egress. Also, being heavier, they may not be able to access locations because of bridge weight limitations. Finally, the Type I engine is generally built for municipal use with paved streets, so it generally doesn’t perform well on dirt or poorly maintained mountain roads that are better accessed with a four-wheel-drive engine.

With larger fires becoming more frequent and resources being drawn down, the Type I engine may be the only engine resource that an IC can get in the shortest time. It has deficiencies just as any engine type does. However, if you are assigned to a Type I engine, you must be prepared to fill whatever role is needed or assigned at the incident.

Bryan McLean is a 24-year fire service veteran and a captain with the Cosumnes (CA) Fire Department, where he has worked for the past 13 years, including six as captain and two with the training division. McLean has also worked for the Novato (CA) Fire Protection District as well as the California Department of Forestry and Fire Protection. He has a B.S. degree in fire administration and an associate of science degree in fire science.